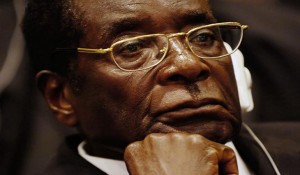 AS Parliament’s bell chimed, calling lawmakers to take their seats on what was to turn out to be an historic Tuesday, National Assembly Speaker strained his ears to take a telephone call.

Outside Parliament building, on Harare’s Nelson Mandela Avenue, hundreds of dancing and drum-beating citizens had gathered to demonstrate their support for unprecedented impeachment proceedings against President Robert Mugabe (pictured).

Just over two months ago, on September 17, Mugabe had officially opened the current session of Parliament, with supporters cheering as he slowly went about the ceremony, which still has a strong colonial flavour.

It was 1353 hours in Harare. As excited legislators’ feet shuffled on the Parliament floor, Mudenda answered a call that would change the course of Zimbabwe’s history.

President Robert Mugabe, Mudenda’s leader in the ZANU-PF Politburo, was on the other end of the line. He was calling to inform Mudenda, in terms of constitutional provisions, about his intention to resign.
Doorstepped by The Financial Gazette yesterday as he announced that ZANU-PF had nominated former vice president Emmerson Mnangagwa to replace Mugabe as state president, Mudenda refused to reveal what exactly the former president had told him in the momentous telephone conversation.

“I can’t tell you what I discussed with the former President on the phone, it is confidential,” Mudenda said.

He also refused to be drawn to disclose how Mugabe had sounded.
After the call, Mudenda, proceeded to the House floor, keeping a poker face as he presided over the commencement of impeachment proceedings.

The Speaker, an advocate, outlined the steps to impeachment, giving nothing away.
About 300 parliamentarians, three times the design capacity of the Westminster-inspired chamber, then resolved to adjourn and resume proceedings at 1630 hours at the more spacious Harare International Conference Centre on the edges of the central business district. Mugabe has held court here innumerable times over the past three decades.

About an hour into the debate, Mudenda stood up to read out a note handed to him by Justice Minister Happyton Bonyongwe.

“The Honourable Jacob Mudenda…” he began, his voice’s echo cutting through the palpable anticipation in the makeshift chamber.

“Notice of resignation…” he ventured to continue, but was interrupted by a loud roar as delirious lawmakers erupted.

Just like that. Mugabe, one of the last breed of Africa’s mythical “big men”, had left the stage. 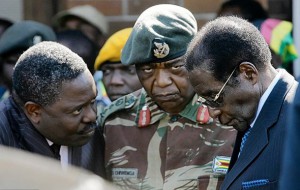 FOLLOWING days of fast-moving events, one of Africa’s longest-serving leaders, Robert Mugabe, resigned on Tuesday under pressure from his party and the military, capping an extraordinary week and bringing widespread relief to a nation on the edge.
Below is a timeline of the past week’s dramatic developments:

Nov. 16: TWO days after the military announced its unprecedented intervention in civilian affairs, effectively placing Mugabe under house arrest, capturing several ministers and seizing control of the state broadcaster, Mugabe is photographed smiling and shaking hands with the army commander at the State House. It is announced that the military had opened negotiations with the president. The army insists it has not taken over government.

Nov. 17: The army, which continues to recognise Mugabe as president and commander-in-chief, allows him to make his first public appearance since being placed under house arrest. He appears at a university graduation ceremony to polite applause. Meanwhile, the ruling ZANU-PF’s provincial structures hold meetings to begin the process of removing Mugabe from his position as party president, while expelling his wife and her closest political allies.

Nov. 18: Thousands of people pour onto the streets of Harare and Bulawayo in anti-Mugabe protests, which are replicated in several global capitals where the country’s citizens have taken residency. During the peaceful demonstrations, which would normally have been forcefully suppressed by the police, protestors show overwhelming support for the military, with many posing for pictures with soldiers manning armoured tanks.

Nov. 19: The ruling party’s Central Committee holds a special session which resolves to remove Mugabe as party leader. The party tells him to step aside as president by noon the next day, or face impeachment in Parliament. In a late Sunday night speech on national television, Mugabe appears to dig in and does not announce his resignation as widely anticipated. Disregarding the ZANU-PF resolution earlier in the day, Mugabe says he will preside over the party’s Congress, slated for December.

Nov. 20: In an evening press conference, Zimbabwe Defence Forces chief, General Constantino Chiwenga reveals that Mugabe had made contact with former vice president Emmerson Mnangagwa, whose ouster on November 6 had precipitated the standoff between the president and the military. The two men would soon meet to deliberate on the crisis, the general said. The ZANU-PF Parliamentary caucus meets to plot the impeachment process, announcing it had mustered the requisite numbers and cross-party support.

Nov. 21: In a statement issued from an undisclosed location, Mnangagwa, said he was not willing to meet Mugabe as he feared for his life. Mnangagwa called on Mugabe to resign or face humiliation. As lawmakers gather in Parliament, Mugabe puts through a lunch-time call to National Assembly Speaker Jacob Mudenda, signalling his intention to resign. A joint sitting of Parliament’s two houses convenes at a Harare hotel to being the impeachment process. Before the action commences, Mudenda reads out Mugabe’s resignation letter, triggering wild scenes in the chamber and across the country. Global news networks carry images of delirious Zimbabweans, both inside and outside the country, celebrating the end of Mugabe’s 37 year rule.

Nov.22: National Assembly Speaker Jacob Mudenda announces that ZANU-PF had chosen Mnangagwa to replace Mugabe. Mnangagwa is due to be sworn in on Friday, the Speaker announced.
Mnangagwa jets in from South Africa, where he met President Jacob Zuma earlier on Wednesday.
newsdesk@fingaz.co.zw