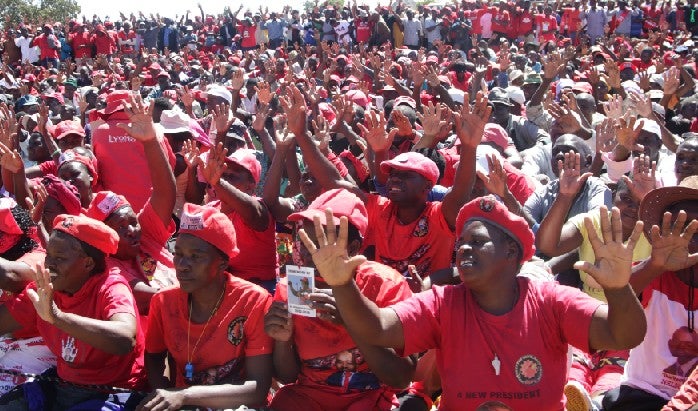 The MDC party led by Nelson Chamisa celebrated 20 years of existence at Rufaro Stadium on September 28 2019, under the theme, “celebrating courage, growth and people’s victories”. As the MDC celebrates two decades of existence, the party’s stakeholders, the membership, are eager to know the significance of the 20 years and how the party intends to take the party forward effectively and efficiently.

One of the senior members of the party thinks MDC has come of age and has demonstrated that it is not a fly-by-night organisation, but a permanent feature on the Zimbabwean political landscape, which cannot be wished away. It is no longer possible to have a one-party state in Zimbabwe as envisaged by the late president Robert Mugabe since the 1980s. To spread its wings, the MDC needs a robust rural strategy.

That the people of Zimbabwe have stood with the MDC since its inception is not questionable, as the attendance at its celebration showed. That Chamisa has managed to hold fort after the death of the founding president Morgan Richard Tsvangirai in February 2018 is also not questionable. The attendance at Rufaro was enough to prove that people still believe in MDC as a vehicle to delivering real change in Zimbabwe.

As the party celebrated the 20th anniversary, it still maintained that the 2018 election results were manipulated and that President Emmerson Mnangagwa is in power through the Constitutional Court ruling and not through a popular vote. Chamisa maintains that he won the elections although the constitutional court ruled in Mnangagwa. As he addressed the gathering, Chamisa declared he was open to genuine dialogue with Mnangagwa’s favour, and his meeting with some smaller political parties was a waste of time.

The biggest challenge for the MDC is how to translate its popularity into winning an election and forming a government. Since the arrival of the MDC on the political scene in 1999, the possibility of having one-party state as envisaged by Mugabe is dead as the MDC has managed to survive two decades of brutality and naked hostility from Zanu PF.

The need for a workable and robust rural strategy is born out of the realisation that the MDC has generally performed badly in rural areas since itsnception. That Zanu PF has maintained its rural area grip, has been proven statistically. The refocus by the MDC is meant to break the jinx. The MDC has now realised that the rural strategy is key to its winning formula. The party has realised that they need a new strategy tailor-made to suit the rural electorate. It may not be enough to just go to rural areas and tell the prospective voters about democracy, electoral reforms and the rule of law. While these are tenets of good governance, the rural folk may want something more than just imported concepts.

As the battle to wrest power from Zanu PF rages on, it is no secret that for some time now, the MDC is struggling financially. If the rural strategy is polished up and rolled out, the party will need financial assistance to give it traction. The David Coltart-led treasury portfolio needs to come to the party.

If the MDC continues to fail to take state power, there is danger of people losing patience with it. Fatigue is sure to creep in and once that happens, it will be difficult to rejuvenate the voters.

Whether there will be serious negotiations between Chamisa and Mnangagwa to arrest the political paralysis and economic meltdown, only time will tell. But the situation on the ground tells a sad story. Zimbabweans are toiling, the economy is on its knees and the nation continues to be restive.

Just where is this nation being led to? Are the political gladiators going to swallow their pride and sit down for the good of the nation? These and many other questions are common as people struggle daily.