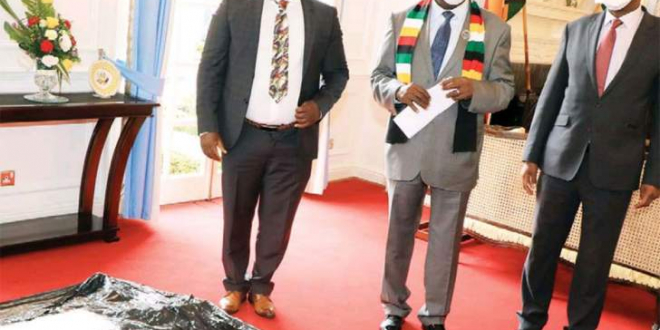 PRESIDENT Emmerson Mnangagwa’s Special Anti-Corruption Unit (SACU) and the President’s family friend, Delish Nguwaya have been accused of visiting a Harare businessman in remand prison to try to extort him.

This came to light in a letter to Prosecutor-General, Kumbirai Hodzi by Norton MP Temba Mliswa highlighting the irregular conduct of Nguwaya and officials from SACU.

The letter dated August 25, 2020 was copied to Mnangagwa, his deputies Constantino Chiwenga and Kembo Mohadi and Defence minister Oppah Muchinguri.

Mliswa raised concern over the visit of SACU officers in the company of Nguwaya “to extort” businessman Felix Munyaradzi at the Harare Remand Prison.

The motor-mouth MP demanded that the State should investigate the “unlawful visit” by Nguwaya, who is the complainant in the matter that has resulted in Munyaradzi’s arrest.

“In my capacity as a Member of Parliament and mandated in my role of legislation, representation and oversight in both constituency and national interests and indeed as a concerned citizen of Zimbabwe, I hereby raise my extreme consternation over a visit made by a one, Delish Nguwaya to a Felix Munyaradzi who is currently on remand in custody at Harare Remand Prison,” Mliswa wrote.

“My concern arises from the fact that Munyaradzi is the accused person in a matter where he is alleged to have duped Nguwaya and others of money for land.

The Norton legislator said Nguwaya visited Munyaradzi on two different occasions in the company of a certain individual from SACU in the absence of the investigating officer.
“Nguwaya has made two such nefarious visits in the company of certain individuals from the Special Anti-Corruption Unit (SACU) in the President’s Office without the presence of the investigating officer. Is this standard practice?” Mliswa queried.

“It goes beyond any ethical or lawful explanation to understand how Mr Nguwaya may be granted such access given the circumstances,” added Mliswa.

“These unlawful visits have the propensity to compromise the case and promote evidence tampering. Suffice to say, the illicit, unrecorded visits to solicit bribes are in itself criminal.

“I, therefore, urgently request for an immediate investigation to be conducted into the alleged visits by Nguyawa and for justice to prevail accordingly.”

Mliswa said his belief was that the unit should report directly to Hodzi as the Prosecutor-General, not to Mnangagwa, which unfortunately, “has the propensity to promote abuse of office and foster the unsavoury practices of indiscriminate arrests and opportunity for extortion in the false name of the President.”

Contacted for comment, SACU head Tabani Mpofu said: “I don’t participate in rumour mongering and nuisance. I am sure your letter, was it not addressed to Hodzi? Find out from Hodzi.”
Hodzi was dropping calls claiming the line was not clear.

Nguwaya said he did not know anything about the purported visits, claiming there was a smear campaign against him.
“How can I extort from someone who stole from me?”