Zvamaida Murwira Senior Reporter
President Mnangagwa yesterday read the riot act to procurement entities in both the public and private sectors, warning them to desist from malpractices like collusion, inflating prices on capital goods, saying Government will not tolerate filthy, criminal and greedy tendencies.

He said procurement units in Government ministries, departments, State entities and private concerns must show the highest standards of personal and professional integrity by abandoning the old culture of corruption to ensure sustainable economic growth.

The President said this during the launch of the Procurement Regulatory Authority of Zimbabwe (PRAZ) in Harare yesterday, which replaced the State Procurement Board (SPB). 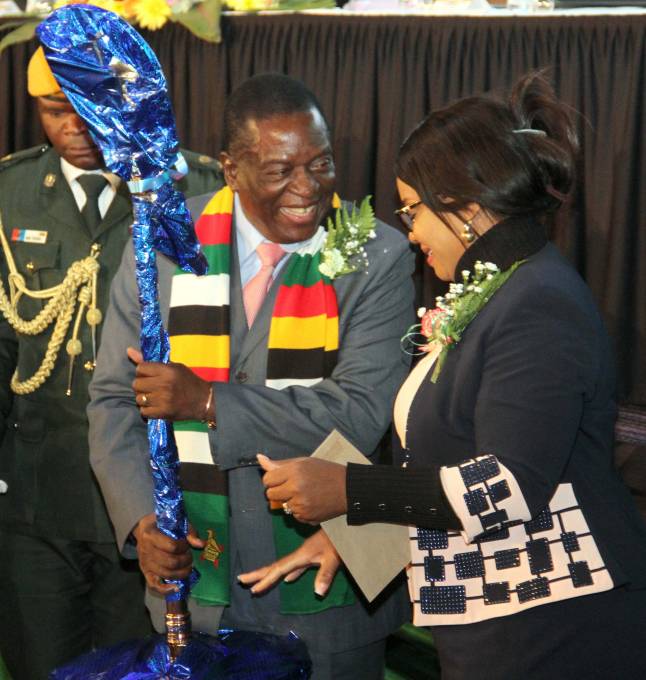 President Mnangagwa receives a token of appreciation from Procurement Regulatory Authority of Zimbabwe board chairwoman Mrs Vimbai Nyemba at the official launch of the organisation in Harare yesterday. — (Picture by Innocent Makawa)

PRAZ was created under the Public Procurement and Disposal of State Assets Act to supervise procurement units after Government tendering was decentralised.

“The past culture of collusion between public officials and cartels or third parties in our procurement systems should be stopped.

“I am aware that some Government departments have a tendency of grossly inflating prices of essential capital goods to the detriment of the ordinary people, who have been going without services,” said President Mnangagwa.

“My Government will not tolerate such filthy, criminal and greedy tendencies. Let us all put the needs of the generality of our people first and undertake our responsibilities professionally and in the national interest.”

He said it was disheartening that purchasing and supply activities had in the past been characterised by procurement malpractices such as bid rigging and complementary bidding.

“In some cases, contracts were awarded without following proper tender procedures, while awarding committee members sometimes doubled as contractors. These procurement malpractices in both public and private sectors must certainly stop,” said President Mnangagwa. 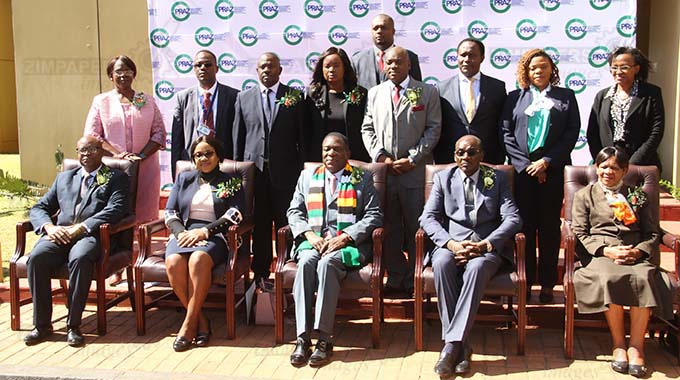 PRAZ, said the President, must conduct its regulatory function in a manner that boost public confidence by diligently executing its mandate to ensure a modern public procurement system that is transparent, cost effective, competitive and managing risks.

“In addition, bidders must be treated fairly to guarantee procurement contracts that represented quality goods and services and value for money. It will not be acceptable for PRAZ to become the bottleneck which results in undue delays in our procurement systems, hence negatively impacting on the implementation of Government programmes and projects,” said President Mnangagwa.

He called for ethical behaviour in procurement and supply, saying that was paramount for effective allocation and utilisation of resources.

“Boards of directors of our State- owned entities and parastatals must be alive to their fiduciary duties. The appropriate oversight must be exercised at all times. Corruption, acts of omission or commission by management, board members or contractors will not be condoned,” said President Mnangagwa.

“Let me hasten to state that President Mnangagwa’s commitment to re-engagement with multilateral institutions has borne fruits as the public procurement and reform programme was supported by the World Bank to the tune of US$2million grant. The said reforms will see a secure electronic government procurement system being instituted as a positive step to digitalisation and modernisation of execution of Government work,” said VP Mohadi.

“You are all aware that the SPB was marred by myriad of corporate governance deficiency thus the conception of the PRAZ sought to increase great transparency and monitoring standards in our public entities.” 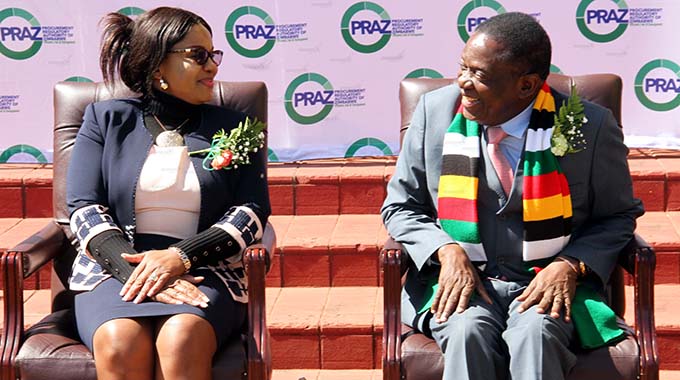 President Emmerson Mnangagwa discuss with the board Chairperson Mrs Vimbai Nyemba during the official launch of procurement regulatory authority of Zimbabwe in Harare yesterday. -(Picture by Innocent Makawa).

Harare Provincial Affairs Minister Oliver Chidawu said the launch of PRAZ would address challenges that had been experienced during the subsistence of the SPB.

“The launch of PRAZ will indeed address some inherent inefficiencies and loopholes in the adjudication and award of public tenders among them a host of bureaucratic shortcomings that previously characterised procurement system under the abandoned SPB.

“Today’s launch is also a panacea to the decentralisation of a procurement system to ensure that the public system become a strategic tool for economic growth and development in support of our local industry, small to medium enterprises, joint ventures, Public, Private Partnerships.”

PRAZ chairperson, Mrs Vimbai Nyemba said procurement had become a profession in the public sector and accounting officers would now be required to establish units for that purpose.

“Procurement Officers shall be issued with a licence to practice., all in an effort to increase the price of corruption. As we all know, the world over, public procurement is one of the activities most vulnerable to corruption. This is due to the volume of transactions and the financial interests at stake,” said Mrs Nyemba.

The event was attended by Cabinet Ministers, Members of Parliament, captains of industry and senior Government officials.