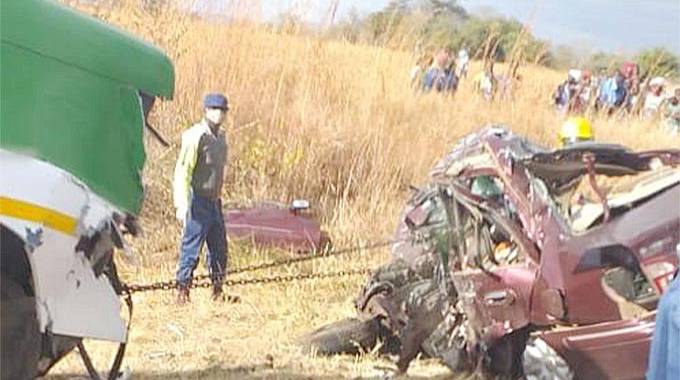 The wreckage of the vehicle that claimed six lives in Banket yesterday.

Six people including two Chinhoyi University of Technology (CUT) fourth year students died on the spot when the vehicle they were travelling in rammed into a haulage near Banket along the Harare-Chirundu highway yesterday afternoon.

Details of the accident remain sketchy but it is understood the driver of the vehicle, a Nissan Sylphy, was trying to overtake in front of an oncoming vehicle.

Asst Comm Nyathi told The Herald this morning that they were “investigating an accident that killed six people in Banket yesterday”.

The deceased were on their way from Harare to Chinhoyi.

“The 4.1 students (name provided) were on vacation and they decided to drive to Chinhoyi to collect their belongings where they used to lodge last semester after hearing that universities are no longer opening.

“One of the students was driving and they are believed to have picked passengers at Greencroft,” said the CUT’s director of communications and marketing, Dr Musekiwa Tapera.

A mother and child also died in the crash.