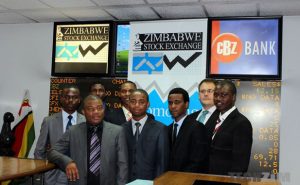 Investors’ interest in Zimbabwe may have risen since soldiers forced long-standing President Robert Mugabe to quit in November, but figuring out when to re-enter the southern African economy is causing a dilemma.

While Zimbabwe, whose economy all but collapsed under Mugabe, has no traded bonds, its stock market, with a capitalization of almost $12 billion, is bigger than those of Botswana, Ghana and Zambia combined.

Most money managers will probably wait until after elections scheduled for July 30, which will pit incumbent President Emmerson Mnangagwa, a former spy chief who was close to Mugabe throughout his rule, against Nelson Chamisa, leader of the main opposition party.

But even if the vote goes smoothly, there will be the issue of the premium currently attached to Zimbabwean stocks: the nation, which doesn’t have its own currency, is short of cash dollars, which has caused locals to pile into equities.

Some investors measure the premium by taking the difference between the price of Old Mutual Plc’s stock in London and in Harare, Zimbabwe’s capital. While the gap has shrunk since Mugabe’s ouster, the Harare shares still cost twice as much as the London ones, when converted to dollars.

In essence, investors need Zimbabwean stocks to fall, and thus that premium to shrink, before they’re confident enough the cash crisis is ebbing.

Yet as Exotix Capital points out, any alleviation of the cash shortage would also increase the underlying value of stocks, since it would boost the broader economy and consumer demand.

“A judgment on whether current valuation multiples are attractive requires disaggregating the ‘cash-substitute’ premium (and one’s view of whether that increases or reduces over time) and the valuation of the underlying business (and one’s view of whether that is fair or not),” Exotix analysts Christopher Dielmann and Hasnain Malik said in a note Wednesday.

For now, investors trapped in Zimbabwean equities, including Franklin Templeton Investments and Cape Town-based Allan Gray, will have “little option but to reinvest dividends or rotate within local equities,” they said. “For those considering new investments, these face-value multiples are likely still too high, regardless of whether the prospects for re-capitalization of the economy are likely to improve.”

Newer Post
‘We have a new chance’: Zimbabwe gears up for elections after Mugabe
Older Post
US warns Zimbabwe over election after 2-year-old killed