So Senator “President-Elect” Mwonzora, Lacoste is a better cancer than G-40 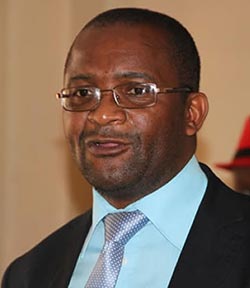 The late Dr. Morgan Richard Tsvangirai was once a member of Zanu PF, but when he found out that Zanu PF did not have the interest of the people at heart, he abandoned Zanu PF. Dr. Tsvangirai was right because anyone who abandons the repression by Zanu PF is the right person.

And you joined the party that he founded. I don’t believe the stories that you are a founder member of the MDC which Dr. Tsvangirai helped form. Being a legal advisor to the Zimbabwe Congress of Trade Unions doesn’t translate into being a founder of the MDC. I will research further into some hints that I have heard that you didn’t become part of the Movement for Democratic Change at its formation because you didn’t want to be led by an “uneducated” Tsvangirai, and when I prove that it is a lie, I will apologise to you. I am convinced that you were still with the late Edgar Tekere led Zimbabwe Unity Movement at the time of the formation of the Movement for Democratic Change. I have heard that when the Zimbabwe Unity Movement became defunct, you joined the United African National Council, formerly led by the late Bishop Abel Muzorewa.

So, Zanu PF had its usual problems, and two factions emerged, the G-40 and Lacoste. Lacoste prevailed and pushed out the G-40. There may be some elements of the G-40 remaining, but some of them have left, and I salute those who have left, because anyone who abandons the repression by Zanu PF is the right person.

So what is this thing you now go about that  the G-40 are fuelling divisions within Zanu PF? I don’t think the G-40 were involved in your backstabbing of the late Dr. Tsvangirai, when, despite the countrywide consultations that he had undertaken before appointing Engineer Mudzuri and Advocate Chamisa as Deputy Presidents, you went behind his back to sponsor Partson Murimoga’s High Court lawsuit to have the appointments of Engineer Mudzuri and Advocate Chamisa reversed. Thank God the evil that men do sometimes comes to the fore, Murimoga has now confessed that you sponsored the lawsuit. It would sound like it was your plot to claim the MDC-T Presidency, probably knowing that Dr. Tsvangirai was not in the best of health, and probably knowing also that with three Deputy Presidents, your chances would have been very slim to take over.

And interestingly enough, you clandestinely fought Dr. Tsvangirai in the courts, through Partson Murimoga, for appointing two Deputy-Presidents. But barely a week after what has widely reported as your sham election, you appoint the same Engineer Mudzuri whose appointment by the late Dr. Tsvangirai you challenged, to the same position that Dr. Tsvangirai appointed him to after he had put in a national consultation process in which Senator Komichi reportedly played a huge role – Senator Komichi may correct me if I am wrong, and I apologise in advance if I am wrong. So if Dr. Tsvangirai consulted before making those appointments, who did you consult between the election date and the day you announced the appointment, including appointments of officer of Congress who should not be appointed in terms of the Constitution which you claim to be champion of? And how does Dr. Khupe feel being put in the same position as she was put in by Dr. Tsvangirai’s 2016 appoints? How does Engineer Mudzuri feel following a repeat of the same appoint as made in 2016?

Insiders say the appointments were rushed to squash the prospects of any further discussion about the money that you used to buy votes. Not that any of the money is missing, but the way it was reported by insiders is that you wanted to be the one to be seen controlling the distribution of money through your proxies in the party. It’s the politics of hunger in Zimbabwe, and he who provides resources places themselves a notch ahead of the rest. What worries some of us who pay tax is that the money withdrawn was reportedly deposited into a Bell Petroleum Account number 15104045502014.

The money given to political parties under the Political Parties Finance Act is taxpayers’ money, and as a tax payer, it worries if you hear that the money you contribute to has been deposited into a bank account that has nothing to do with the purpose it is meant for. This is money laundering and corruption and the Anti-Corruption Commission, the Auditors who have been tasked to audit the accounts – must look into that reported transaction. Dr. Khupe, Chief Ndlovu, and all those who made the claims of the corrupt transaction must also come clean on that allegation, otherwise, if they change stories the public will think they have been bribed by being assured they will not be recalled from Parliament and Senate respectively. That obviously is the way of retaining support, as publicly declared by Senator Komichi when he said Parliamentarians will support the MDC-T when they realise who has the power to recall. Many MPs have been terrorised into this project because of the fear of being recalled, justifiably so in some cases as they had huge loans with Parliament for the cars procured through Parliament which they risked losing, or had other loans which they had taken hoping to use their parliamentary earnings to repay.

Zanu PF is cancer that just has to be uprooted out of society and to hear an opposition President say they want to work with Zanu PF is the last thing to expect from genuine opposition. Even some of your Congress delegates are shaking their heads at your pronouncements that you will work with Zanu PF, an offer that has been readily been accepted by the Zanu PF President, to the extent that it was a main story on ZBC news. There is no harm in making Zanu PF to account, and making Zanu PF to account is not working with Zanu PF. Making Zanu PF to account means exposing the bad things that Zanu PF does, and that is what genuine opposition should be doing. Parties in Government do not need opposition support, but they need to be criticised for the bad things they do. Of cause, the opposition sometimes goes to the extreme and criticise even things that do not have to be criticised, which is not good, but to work with a Governing party is taboo.

Mr. MDC-T “President-Elect” Senator Mwonzora, know it that the Zanu PF oppressed people of Zimbabwe are really thinking seriously about your dislike of people who have left Zanu PF, like Dr. Tsvangirai and Comrade Tekere did when they realised Zanu PF is stinky, when at the same time you publicly tell the world that you will work with Zanu PF. Who is a better devil, former Zanu PF members who were part of the G-40 or Zanu PF? And to further expose you, you claim you are open to working with every Zimbabwean, so the G-40 are not Zimbabweans? People’s memories go back to when Victor Matemadanda of Zanu PF presentation that has circulated widely campaigned for you to be MDC leader, because ruling parties want the opposition leaders who they can control, and you are already behaving as if you are under Zanu PF control.

Do not expose yourself any further, Comrade President – we are watching your steps.

I know the chances are you will ignore this, and that no one will likely challenge you over the same, but I just wanted to make the point for the record, it will haunt you at some point in the very near future.