So, You Think Homosexuality Is Un-African? Um, Think Again. 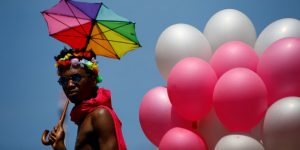 Dispelling the myth: same-sex relations have long been part of African culture

Anti-gay sentiments in Africa, which run counter to a history of same-sex practices across the continent, are often fuelled by the hostile attitudes of some in key leadership positions. During the 138th Inter-Parliamentary Union Assembly in Geneva this year, Uganda’s Speaker of Parliament, Rebecca Kagada, threatened to withdraw her country from the gathering should some nations insist on pushing for the inclusion of LGBT people in a declaration on migrants and refugees.

Kagada’s rant was followed by a renewed call by members of parliament in Uganda to introduce an anti-gay law based on the premise that homosexuality is unAfrican. Of course, this idea of homosexuality being “unAfrican” reverberates throughout the continent’s political and other elite circles.

Dr Ezekial Mutua, CEO of the Kenya Films and Classification Board, has written a letter to the NGOs coordination board to investigate foreign NGOs under suspicion of funding acts of homosexuality in Kenya. In an interview with The Nairobian, Dr Mutua declared himself a defender of African morals and sexual decency, saying he would be prepared to lose his job to fight what he called a form of neo-colonialism.

An editorial in the Ghanaian Times, a Government-owned daily newspaper, describes LGBT rights as ‘alien’ and as unacceptable values that are not in tune with Ghana’s socio-cultural values and religious beliefs. The newspaper went on to say that it would strongly support moves to reject the imposition of any foreign values on Ghana.

Ironically, in 2017, a commissioner of the Zimbabwe Human Rights Commission praised former president Robert Mugabe, who himself equated gay people to pigs and dogs, for fighting the imposition of “un-cultural” practices on the country by foreigners.

During a celebration of Zimbabwe’s 37 years of independence, commissioner Petunia Chiriseri said during a sermon: “As a church, you (Mugabe) took a firm stand against unbiblical, un-cultural, unacceptable practices which foreigners… seek to impose on Africa”.

Sadly, those in power wield influence and their ideas on homosexuality and sexual minority groups can often filter down to society at large.

Zimbabwe National Army Commander Lieutenant-General Phillip Valerio Sibanda believes that “cultures of powerful nations have been marketed through Western-owned media platforms” and that “once taboo practices” such as homosexuality have gained a foothold in African countries. Nigerian President, Muhammadu Buhari expressed similar views during a visit to the United States where he said that sodomy “is against the law in Nigeria and abhorrent to our culture”.

Sadly, those in power wield influence and their ideas on homosexuality and sexual minority groups can often filter down to society at large. In October 2016, the International Lesbian, Gay, Bisexual, Trans and Intersex Association (ILGA), released a report measuring public attitudes to LGBTI people on every continent.

One of the questions asked in the study was whether the same-sex desire is a Western phenomenon. More than half of respondents in Uganda (54 percent) and Nigeria (51 percent) believed that same-sex attraction was a phenomenon imported from the West. Ghana, Kenya and Zimbabwe also polled high with 49 percent, 48 percent and 47 percent believe this to be the case.

Whether it is the elite pushing the “gay rights are unAfrican” narrative out of pure ignorance, or whether power-hungry politicians dance to the tune of the people they govern in order to remain popular with the electorate, there is no question that categorising same-sex attraction as a foreign concept and a form of neo-colonialism serves as a major obstacle to LGBTI rights on the continent.

Historical evidence in many instances dispels this notion that LGBT people, as well as alternative gender expressions and identities, are alien to African culture. In pre-colonial Uganda, some priests in the Kingdom of Bunyoro would wear women’s attire, and in the Teso tribe, men who dressed as women were officially recognised as a third gender. Similarly, in the Kikuyu and Meru tribes in Kenya, special religious leaders called mugawe dressed and wore their hair like women, and in some cases were even recognised as being married to other men.

The Kamba tribe in traditional Kenyan society allowed same-sex marriages between two women in order to encourage fertility. For the Kamba tribe, a son represented the past, present and future, and without a son, a family’s future and their ancestors would be spiritually erased. Where a woman was unable to produce a son for her family, she was allowed to marry another woman who would then act as a surrogate. The son of this surrogate mother would then become the torchbearer of the original husband and wife’s family spirit.

Debunking the idea that LGBTI people are unAfrican is another powerful tool to further LGBTI rights on the continent. It all boils down to education.

In the Langi tribe of northern Uganda, people who were born intersex or who were regarded as impotent, would be labelled as a third gender known as mudoko dako. Mudoko dako people were legally and socially allowed to marry a man or woman and acquired either traditional male of female roles.

During the 18th and 19th centuries in the Ashanti Kingdom, male concubines in Ghana were a common sight. These male concubines were sex slaves who were expected to dress and act as women. Furthermore, in the Dahomey Kingdom in Ghana, males who were castrated during rituals served as royal wives within the upper courts. These eunuchs were regarded as more female than male and occupied influential positions in the courts, thus granting them extensive power over the Kingdom.

Throughout Western Africa, especially in Northern Nigeria, the Hausa tribe’s vocabulary included “dan Daudu” which means ‘men who are like women’. When a child was recognised as a dan Daudu at an early age, he would be given female-specific toys and encouraged to express his gender openly regardless of biology. As adults, they would perform the tasks of women such as preparing and selling food at the marketplace. Furthermore, they would continue to live with other women until taking a husband.

Today, the Hausa tribe is one of the most hostile towards queer people and queer culture. This hostility is further fuelled by the presence of extreme Islam in the northern territories of Nigeria. The Northern States under Sharia-Islamic religious laws also have the death penalty for anyone convicted of same-sex offences.

Previous articles by the IRR suggested various ways to promote tolerance and acceptance of the broader LGBTI community. The first is to increase the visibility of LGBTI people by encouraging broader media representation to allow them to have a voice and share their experiences. The second is recognising their relatively strong spending power and to highlight their contribution to the economy as a means of encouraging elites to empower LGBTI people since it is profitable to do so.

Debunking the idea that LGBTI people are unAfrican is another powerful tool to further LGBTI rights on the continent. It all boils down to education. Studies have shown that tolerance for gay people is highest among educated Africans. LGBTI people are among the most vilified groups on the continent today, but simply paging through the history books annuls the rhetoric of African leaders who propagate homophobic ideas.

Gerbrandt van Heerden is an analyst at the Institute of Race Relations (IRR), a think tank that promotes political and economic freedom. If you agree with what you have just read then click here or SMS your name to 32823.