Solution to the cash crisis in Zim 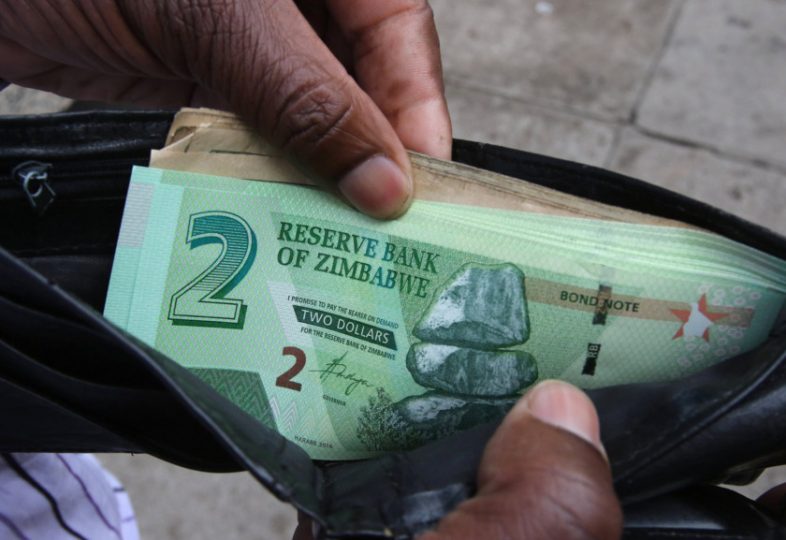 Source: Solution to the cash crisis in Zim – The Zimbabwe Independent July 27, 2018

Pursuant to the adoption of the multicurrency system in Zimbabwe until around 2015, one could withdraw up to US$2 000 from an automated teller machine. If one decided to withdraw over the counter (i.e. from the tellers), the limit was up to US$10 000. That is how liquid the financial system was.

What then happened thereafter? An ominous rumour about a new currency called a bond note surfaced and gained momentum. The rumour gained traction further and it was said that such a currency would rank pari passu (at par) with the US dollar, at 1:1. This obscure rumour started the process of capital flight, with consumers hoarding the US dollar against the imminent dilution of their greenbacks.

Moreover, prior to the advent of the bond note, the Reserve Bank of Zimbabwe’s (RBZ) capital reserves requirements that forced commercial banks to put aside US$100 million in liquid assets was a death knell to the banking system in general and the economy in particular. Currently, Zimbabwe has potentially the highest capital reserves requirements in Africa. Zimbabwean banks (small as they are, and serving a very small population relative to their continental peers) are forced by regulatory authorities to put aside the biggest cash reserves.

This means that, typically, US$100 million belonging to a Zimbabwean bank is not ordinarily available to its depositors whenever they need it. Such a huge and outsized figure is a sure way of draining liquidity out of any economy in general and a weaker one like Zimbabwe in particular.

This amount of US$100 million which is set aside can be multiplied by the number of banks and you will see that this adds up to billions of dollars in liquidity. It is inconceivable and indeed mind boggling how such a small economy like the Zimbabwean one can require that each bank put aside US$100 million as a minimum tier-one capital when continental giants only require a small fraction of that figure

It is clear that two phenomena caused the present cash shortage. These two causes being the introduction of bond notes and the regulatory requirement that Zimbabwean commercial banks must each put aside US$100 million.

Ordinarily, there is nothing wrong with a country introducing its own currency. But Zimbabwe’s circumstance is extraordinary. This is a country which printed its own money until its value depreciated to absolute zero through hyperinflation. University of Chicago’s Professor Milton Friedman famously said: “Inflation is always and everywhere a monetary phenomenon caused by excessive printing of money.” The reason why Zimbabwe’s inflation rate had remained at about 0% since dollarisation is that the monetary authorities could not print money.

Notwithstanding the RBZ’s decree that the bond notes should exchange for one-to-one to the US dollar, the market knows only too well that, in real terms, a bond note is not worth the same as a US dollar. Immediately after its introduction, we began to see a divergence in the valuation of the two currencies with the spread (.i.e. difference) between their values widening exponentially over time.

By introducing the bond notes at a prefixed exchange rate of 1:1 to the US dollar, the so-called Gresham’s Law set in, that is to say, bad money driving out of circulation good money. Gresham’s Law occurs when the exchange rate between two currencies is fixed. As circumstances change, currency movements occur due to market conditions, one currency will become overvalued (bond note) while the other becomes undervalued (US dollar) because of this artificial fixing. The undervalued currency then disappears from circulation as the market tends to horde it and only use it for special transactions. Fixing the US dollar at 1:1 to the bond note undoubtedly had the effect of undervaluing the US dollar and the US dollar disappeared from the financial system.

Against the backdrop of the foregoing, the question which arises is: what can Zimbabwe do now?

Alternatively, Zimbabwe can outlaw the bond note altogether and take it out of the multicurrency system. Then consumers will be free to choose which currency they want. In that way, the US dollar will not necessarily disappear.

Secondly, if Zimbabwe can use the South African rand for all its pricing purposes and as a transactional currency. This is a straightforward thing to do and can be done tomorrow morning. The rand is already legal tender in Zimbabwe so there is no further consultation with anyone that is required. It is a matter of the Zimbabwean markets led by the government just pricing all their goods and services in rand with immediate effect. This can be done within the multicurrency framework where US dollar pricing simply gets replaced by rand pricing.

Given the fact that South African banks are dominant in Zimbabwe, the provision of the rand and the synchronisation of rand transactions will be seamless. The Zimbabwean diaspora in South Africa will also ensure a reliable, steady supply of rands. Cross-border traders also will not suffer currency distortions.

Already, the Sadc-wide SIRESS system that is owned by all Sadc central banks facilitates rand transactions across the region. Through the SIRESS system, a rand transaction in Johannesburg is the same as a rand transaction in Harare or Lusaka. It does not need to go via New York or Mongolia or London like before the adoption of the SIRESS system
In conclusion, therefore, Zimbabwe must simply outlaw the bond note or remove it from the multicurrency system. If Zimbabwe decides to keep the bond note, then its exchange rate must not be fixed to the US dollar. It must be allowed to float so that its value is determined by market forces. This will ensure that the bond note also becomes an internationally tradable currency hence it will cease being a domestic-only currency. The prefixing of its exchange rate at 1:1 to the US dollar resulted in the proverbial Greshamian bad money driving out good money.

If Zimbabwe wants to use the rand, the country can start doing so with immediate effect. No further consultation is required. The SIRESS system is already in place to facilitate rand transactions. The rand can be used within the existing multicurrency system.

The abnormal regulatory requirement that Zimbabwean commercial banks should put aside US$100 million is a counterproductive measure which must be urgently reversed to the pre-2012 levels. If these few measures are done, liquidity will return to the financial system. People will be able to withdraw from ATMs up to US$2 000 while they can withdraw up to US$10 000 from tellers.

Ndlovu, an economist formerly with the South African Reserve Bank, was winner of that institution’s highest honour, The Governor’s Gold Prize, in 2014.