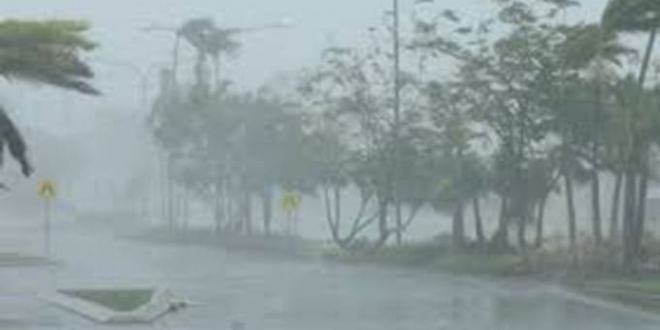 WHEN tropical storm Chalane threatened Zimbabwe and Mozambique late last year, government authorities and aid agencies sprang into action, having learned lessons from the destruction and loss of life caused by cyclones in 2019.

In late December 2020, ahead of Chalane’s arrival in Mozambique and eastern Zimbabwe, it was feared lives, property and infrastructure might be hit hard again.

In the end, the storm weakened and did not cause widespread damage — but measures taken to keep people safe ahead of time suggested disaster prevention efforts have started to move forward in the region.

In Zimbabwe, plans were implemented to protect people by sending out information and evacuating them to shelters in designated schools, churches and public halls.

“We were fearful, undecided whether to sit out the storm in our homes or climb on buses to rescue zones,” said Amos Myambo, a trader in eastern Zimbabwe’s mountainous Chimanimani district, whose grocery shop was swept away during Idai.

About 600 villagers were ferried for free by State buses, private tractors or lorries to assembly points, where they were registered and then taken to evacuation centres, according to a Chimanimani district official.

Crucially, about 150 people still living in camps after Idai were also given shelter at two missionary schools, the UN office in Zimbabwe noted.

In Beira and Sofala provinces in neighbouring Mozambique, some residents of vulnerable areas moved on their own to shelters near their homes, according to Susan Mbalu, spokeswoman for the Africa division of the International Federation of Red Cross and Red Crescent Societies.

The Mozambique Red Cross provided advance warning of the storm to local people, as it usually does, but went a step further, providing training and distribution of kits to reinforce homes and schools ahead of Chalane’s arrival.

Support was provided after weather forecasts triggered the release of emergency funding for what the Red Cross calls “early action” ahead of a potential disaster.

The roofs and walls of 210 huts in camps for people resettled after previous weather disasters were reinforced with tarpaulins, plastic sheeting and piles of sand, said Mbalu.

This measure, rolled out 72 hours ahead of the storm, was deployed in Buzi district, south of Beira, where more than half the province’s vulnerable population lives, she added.

Despite these efforts, the International Organisation for Migration said about
4 940 families at resettlement sites had their tents and shelters destroyed or partially destroyed by Chalane, and required help for the rest of the rainy season.

WhatsApp to the rescue

In Zimbabwe, ahead of the storm’s arrival, technology was used to send out warning messages, adapted to the needs of different communities, to members of the public via short-wave radio, Twitter, Facebook and WhatsApp.

Before the 2019 Idai disaster, the standard advice given out by civil defence authorities was to move to highland areas to avoid flooding.

“In Chimanimani district … it was in the highlands where properties and lives were flattened by muddy waters.”

But with Chalane, officials urged residents to board buses to shelters instead.They also relayed messages in local languages such as Shona with a bullet-point list of how to prepare for expected heavy rains, noted Majoka, who travelled 50km to a rescue centre.

The use of digital media by the authorities to send hourly updates and maps showing where people could wait out the storm was effective, largely thanks to widespread use of WhatsApp.

The mobile phone application accounts for nearly 50% of all internet activity in Zimbabwe as it can easily be installed on cheap Chinese-made smartphones and uses relatively little data.

Chenjerai Gunda, an artisanal gold-miner in Chimanimani, where terrain is vulnerable to landslides due to years of deforestation, checked charts and weather updates on his phone every few hours several days before the storm.

He relied on WhatsApp to evacuate his wife and five children to a rescue centre just in time.

“You don’t need a strong signal to receive or send warnings,” he said.

But the use of cellphone-based messaging was not without hiccups.

Majoka, the maths teacher, said “fake news” and misinformation had also been circulating.

Petty thieves distorted WhatsApp messages, he said, to make sure villages were empty so they could loot small grocery shops.

Some residents who realised what was going on decided to remain in their homes, including Skanyi Ngorima, who keeps a herd of 30 goats in Chikukwa village in eastern Zimbabwe.

“Thieves would feast on my livestock under the cover of the storm,” he said.

Fortunately, as Chalane weakened fast, residents were able to quickly return home, both in Zimbabwe and Mozambique.

But greater disaster prevention efforts will be needed in future as storms intensify with climate change, he added.

He urged African weather services to build partnerships with richer countries so they can access data that will provide better advance warning of climate and weather extremes.

“Just like hurricanes in the southeastern US region, these tropical cyclones are going to frequent Mozambique and Zimbabwe because global warming is transforming normal seasonal rains into dire storms,” Gwenzi said. — Thomson Reuters Foundation