Spreading HIV Has Been A Crime in Zimbabwe for Nearly 20 Years. Now, That May Be About to Change

Willful transmission of HIV has been illegal in Zimbabwe since 2001, part of a strategy to help stop the virus from spreading. But it may be backfiring, since people are more reluctant to admit that they are HIV positive at all. Now, public health officials are campaigning for an alternative approach.

Source: Spreading HIV Has Been A Crime in Zimbabwe for Nearly 20 Years. Now, That May Be About to Change – Global Press Journal 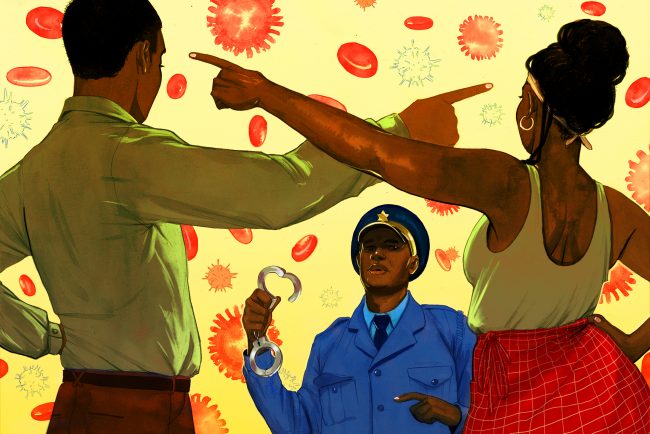 Mlilo and her husband had recently divorced. Seeking revenge, her husband told the police officer that she infected him with HIV – a criminal act in Zimbabwe that can carry a prison sentence of up to 20 years.

She says there was no evidence showing that she infected her husband. Still, she was convicted in 2012 at a magistrate court of willfully transmitting HIV.

The willful spread of the virus has been illegal since 2001, when the Zimbabwean government passed the Sexual Offences Act in an attempt to curb the country’s HIV epidemic. Three years later, Zimbabwe extended the law to include those who believed they might be HIV positive and did not alert their sexual partner.

Since then, the law has been applied to various cases, even to ones where no HIV transmission was proven. But things could be about to change for the 1.3 million Zimbabweans who live with HIV.

At the end of March, Ziyambi Ziyambi, minister of Justice, Legal and Parliamentary Affairs, shared government plans to repeal clauses in the Sexual Offences Act that criminalize the deliberate transmission of HIV, citing increased stigma and overall ineffectiveness.

The amendment was included in the Marriages Bill, which appeared before Parliament at the end of July and before stakeholders and interested groups during a public hearing at the end of August.

The original law criminalizing the spread of HIV was a well-intentioned, reactionary response to people dying of HIV/AIDS, says Raymond Yekeye, program director at the National AIDS Council. But, “despite its good intentions, the law is retrogressive [and] perpetuates stigma and discrimination for people living with HIV/AIDS,” he says.

Dr. Owen Mugurungi, director of the AIDS and TB Unit in the Ministry of Health and Child Care, says that instead of reducing HIV infections, the law could have had the opposite effect, as people who know their HIV status may not tell their partners for fear of prosecution.

“The law pushes people with infection underground,” he says. “Whereas if you [have] an environment in which people are infected and know their status and [are] encouraged to come out and we support them, definitely you will [see] the reduction of HIV infection.”

Mugurungi believes that counselling – done with confidentiality and with consent – is better than legislation. He says the Ministry of Health and Child Care never supported the law and does not refer to it in teachings and campaigns.

According to a report by HIV Justice Worldwide, there are 61 countries where prosecutions for HIV non-disclosure – potential or perceived – and unintentional transmission have been reported. The report notes that the law criminalizing the transmission of HIV in Zimbabwe is vague and broad in application.

And determining who infected who is difficult, if not impossible.

Phylogenetic analysis, a form of testing, can be used to compare samples of HIV to determine whether two individuals are part of the same transmission network. But it’s an expensive test. The chemical substance needed to conduct it must be imported from South Africa or the United States, leading to a cost of more than $5,000-$10,000 per kit. Mugurungi says Zimbabwe has the capacity to conduct phylogenetic tests, but that the testing is not available at any public health institution.

And even if the test were available, it cannot show who was behind the initial transmission.

“From our perspective, our HIV prevention and public health approach is the one that encourages people to get tested and remove stigma and discrimination [and] physical and legal threats which persecute people,” Mugurungi says. “If we remove all those threats, then people will come out and be happy to be tested.”

Tinashe Mundawarara, senior program manager at Zimbabwe Lawyers for Human Rights (ZLHR), says that if the law is repealed, closed cases and those awaiting sentences will be determined based on the law in effect when the crime was committed.

While the ZLHR intervened in Mlilo’s case in 2012, arguing that section 79 of the criminal law was discriminatory, in 2016 the constitutional court ruled against the motion and allowed her case to move forward. Mlilo is currently awaiting sentencing.

Because her case was filed before the Marriages Bill was introduced, it will be determined under the clauses that were still in place at the time, even if that bill passes – a response Mlilo says is unfair.

“I am totally devasted about that,” she says.

Perseverance Zhou remembers the day her brother, Kaiboni Mlambo, was convicted of deliberately transmitting HIV and engaging in sexual intercourse with a minor. She says Mlambo did not know he was HIV positive until the family doctor was summoned to the court to testify.

Mlambo was sentenced to nine years in prison. But in May 2005, eight months into his sentence, Mlambo died.

“We were called in the morning and we were told he had an epileptic fit and died,” Zhou says through tears. “As a family, we were devastated.”

She hopes that what happened to her brother does not happen to anyone else. She believes that the court should have issued Mlambo a warning since there was no proof of infection according to the girl’s father.

“Willful transmission is indeed bad, but I think if people in a relationship are in agreement to use protection then that will be OK,” says Zhou. “Criminalizing HIV is like being given a jail sentence of why you are sick.”

Gamuchirai Masiyiwa, GPJ, translated some interviews from Shona to English.