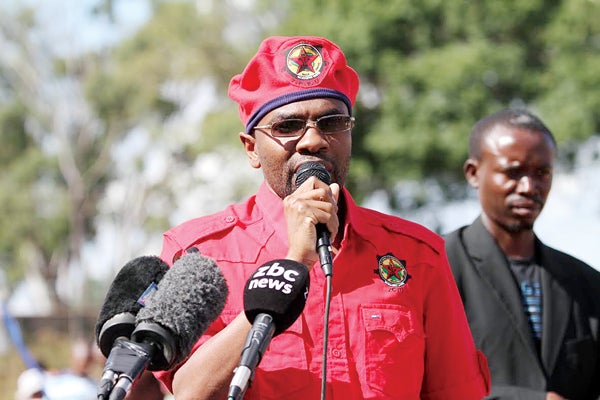 ND: What does the signing of TNF mean for workers?

PM: It is actually a historic moment, a huge milestone. In fact, to say it is a milestone is an understatement because it’s labour which started advocating for a platform for public engagement since 1992, but more vigorously after 1998.

So, it has taken us over 20 years of constant knocking at the doors of the government. This Bill has gone to many parliamentary sessions and not being signed.

We are very happy as labour that at least now we have recognition at law for the need of public engagement, especially on the labour market.

ND: Your relations with the government have not been good lately, is this an opening for something meaningful?

PM: Our labour relationship with both employers and government is traditionally antagonist because it’s a class issue.

Where there is a class issue and there is a tussle for resources and distribution, there are bound to be differences. But our differences were now turning ugly because there was now repression and dictatorship and also intimidation and harassment of trade union officials and activists doing their work.

So, this comes as a big opening. We had a wonderful session with the President where we highlighted all our issues.

The topical issues were to do with the economic crisis and the plight of workers. The issue to do with corruption and lack of transparency in the mega deals; issues to do with lack of consultation on policy issues; the Zimbabwe is open for business and the austerity measures and also the issues to do with repression.

We had a very good exchange, but we want to take it from there. We cannot get everything today, but fortunately, the President has now promised and ordered his functionaries to reinstate the trade unionists who were dismissed from Zesa for exposing corruption and to us, that is a major achievement because it includes senior trade union officials and also our first vice-president Florence Taruvinga.

We have been fighting for this for the past one-and-a-half years and we are grateful for the intervention of the Head of State.

As trade unionists, we do not condone and we do not promote violence, but we do not agree with the State when they try to curtail the constitutional freedoms of labour and citizens, freedom to petition, freedom to peacefully demonstrate to sit-in and freedom to have general strikes.

So, these are some of the conversations that we are going to carry through to the TNF to make the State understands that these are fundamental human rights guaranteed in international conventions and our Constitution and the Labour Act. So, we will take it from there.

ND: What is the state of the workers?

PM: It’s pathetic, workers are suffering. We told the Head of State that it’s a humanitarian crisis. He has promised that he will institute, immediately, his ministries; that is Finance, and Social Welfare.

Measures are needed to ameliorate the suffering of workers and their families who are sleeping hungry. They are food insecure. Most children are going to be dismissed from school. They are dropping out. People are dying in homes.

The situation has reached catastrophic levels and this is one of the urgent issues that we are going to discuss at TNF.

We think the entry point is to evaluate the policy, the macro-economic policy, the monetary policy and the fiscal policy, which we think are archaic and do not speak to the contest of the nation.

ND: So, because of this TNF, is there any withdrawal from the workers in terms of threat to demonstrate?

PM: We made a decision in our last general meeting in May that we will give dialogue a chance. We will ask for a platform to discuss with the head of State, with the ministry, for expedition of the promulgation of the TNF. We said if those processes delay or fail, we will take to mobilising workers.

Strike action is a legitimate form of expressing to government our displeasure. As we speak, the ball is in the court of the government, the convener of the TNF and our tripartite technical committee.

We expect that it will be convened urgently and we are giving dialogue a chance, but we are also reserving and retaining our right to follow through the constitutional guaranteed rights to express our displeasure in certain policies of the State and I think the government will also understand that the workers are suffering and they will quickly deal with the issues that we have spoken to the President about.

ND: You lost one of the labour unions from ZCTU that is the Zimbabwe Teachers Association (Zimta). Now, given the coming of this TNF, does this strengthen your hand as a congress of trade unions or you have been weakened?

PM: We are hearing in the Press that Zimta left us. They have not officially withdrawn from the ZCTU. They are officially members of the ZCTU.

They know the constitutional provisions of the ZCTU, they are supposed to give us a notice, a three months notice.

If they also have any disgruntlement, they are also aware of the provisions of the ZCTU constitution, that has got mediation and also has an opportunity for them to present their grievances in the general council.

We are hearing that part of their disgruntlement or their grievances has to do with what they term unilateral decision-making, but they have been participating in all our decisions, including the decision to vote for MDC that we made in the past election, which we voluntarily made, independently in terms of our processes.

So, they cannot single out any particular fact that we did not agree with them, but we are also worried that instead of coming to us as brothers and comrades and stating their issues, they rushed to all radio stations.

It’s within their right, but we remain sceptical because we are going for the International Labour Conference (ILC) and we have a complaint against the government of Zimbabwe. This complaint is hinged on what we think is the suppression of trade unionists, activists and civil society organisations.

We have seen that in the past years, the government’s response has always been that ZCTU is taking a political route.

So, we are wary and we are suspecting and we hope that is not the case that some of our comrades have taken that as a preemptive route to aid the government with that defence.

If that is the case, it is unfortunate because they will also be short-changing teachers. Teachers are suffering and we think we must remain united as labour.
So, we want them to be part of us, but they also have the right to freedom of association and they can associate with whoever they want.

But whatever we do as trade unions, them and us, we must not jeopardise the rights, the aspirations and the objectives of the labour movement.

So, in the TNF, that is not weakening us because we are the most represented union in all sectors and that we have represented everyone including those who are not members of trade unions who we commonly term as free riders.

ND: Since you have the TNF in the short-term, what is the quick gain that ZCTU can offer to its members?

We have already requested for a meeting with the Reserve Bank of Zimbabwe governor (John Mangudya) and a meeting with Finance minister (Mthuli Ncube).

In that meeting, we are going to persuade and push for immediate currency reforms because even if we negotiate, even if we get 100%, we can’t keep pace with what is happening on the market.

So, what is important is that we push for currency reforms in the immediate future.

In the TNF, we will also persuade the State to take seriously the issue of a political dialogue, socio-economic dialogue and hopefully, in the long-term, we will find ground and come up with some socio-economic and political agreements that will take the country forward.

We will continue to push employers who are supposed to be raising salaries and we also decided that we are going to court over the monetary policy. The RBZ governor has no authority to vary the contractual contracts that workers and employers have had which were based on United State dollar salaries.

So, there is no legal foundation in our view, why employers are not paying in foreign currency or equivalent of the interbank rate for the particular month and why they are charging in US$ and not paying in US$.

So, we think we also have a solid case in court and in the immediate future, we are going there.