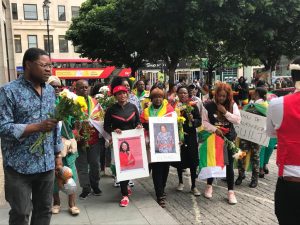 Mnangagwa has made clear that Zimbabwe will have its own currency again by the end of the year. Economist and former senior MDC MP Eddie Cross says it will be the strongest currency in the region. The Vigil respectfully disagrees.

We bottom wipers in Britain are not economists but have watched the Zimbabwe economy slide from bad to worse over the last 20 years or so, with astronomic inflation destroying their hopes for the future and reducing their families to poverty. Inflation is now tipped to reach 280% by the year’s end.

To us the cause of Zimbabwe’s problems seems to be rampant corruption and government ineptitude and, for all the talk, we have seen no serious effort to deal with this. How many known corrupt Zanu PF bigwigs are in jail? None.

Tendai Biti’s criticism of hitherto calm Finance Minister Ncube, made on the sidelines of a book launch in London last week, has provoked the minister into an hysterical response. This will only increase skepticism about the success of his handling of the economy.

The diaspora has no faith in a Zanu PF government and, if the new currency is introduced, we fully expect it to devalue rapidly, leading to yet another chase for the US dollar which has proved such an easy route to wealth for Zanu PF crooks in the past.

The truth is that Zanu PF never changes. It always reverts to dodgy practices that have kept it in power for going on 40 years – violence and corruption. It has become well-skilled in both, with tacit international support. So why should they change a winning formula?

FOR THE RECORD: 29 signed the register.