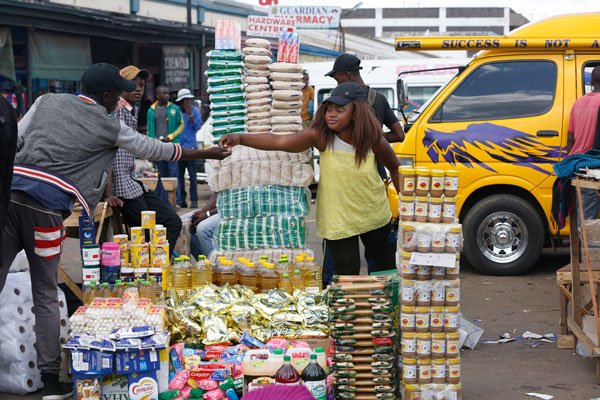 The parallel market for basic commodities is flourishing again in Bulawayo as shortages blamed on a controversial government tax on electronic money transactions and foreign currency crisis worsens throughout the country.

Basic commodities are scarce in the shops, yet readily available on the black market

Zimbabwe started experiencing shortages of fuel and basic commodities such as cooking oil and sugar early this month after the government introduced a 2% tax on electronic transactions above $10 and separated foreign currency and real time gross settlement (RTGS) bank accounts.

Investigations carried out by Standardbusiness in Bulawayo revealed that the parallel market was mainly being driven by some shop managers and supermarket employees who are channelling scarce commodities to the black market at a higher cost.

Prices of basics have been on an upward trend for weeks and the Zanu PF official’s business has joined the majority of retailers in the city charging for some of their products in foreign currency.

This is despite threats by Vice-President Kembo Mohadi and Industry and Commerce minister Mangaliso Ndlovu that government will revoke operators’ licences for all businesses found guilty of hiking prices or demanding foreign currency up front in what seems to be a return of price controls.

A visit to the outlet in the city on Thursday revealed that Modi’s business is charging for some of its products in foreign currency only.

Prices for several beer brands in the wholesale are pegged in US dollars, with a bottle of Viceroy going for US$8.
“We have been instructed to charge for all imported commodities in forex. We are no longer accepting bond notes, EcoCash or transfer on imported commodities,” said a cashier who refused to be named for fear of victimisation.

Modi took to Twitter to justify the move saying suppliers were demanding payment in foreign currency.

He said, “only alcoholic drinks bought in USD are being sold in USD to allow us to restock”

Oil Expressers Association of Zimbabwe chairman Busisa Moyo said even though they had not received reports of hoarding, he could not rule them out.

“We have not received such reports although it is likely as happened last year, cooking oil and other commodities are being used as a store of value and as lucrative arbitrage space where super profits can be made,” he said.

But Confederation of Zimbabwe Retailers president Denford Mutashu said there was danger in losing focus of the real challenges in the economy and try as hard to “spend time on behavioural traits arising out of the problems we create.”

This is not the time to dwell on how a shop employee has behaved without addressing the cause,” he said.

“Manufacturers should simply supply more products into the retail and wholesale sector or government should allow the sector to import and fill up shelves.”

For example, Mutashu said on cooking oil, many, if not all retailers and wholesalers were not happy with some of the processers’ behaviour where they want to please government by “painting a non-existent situation of stable supply yet the majority of our players are struggling to an extent that even other manufacturers who use cooking oil as a raw material are on the verge of closing shop due to drying supplies.”

Mutashu said government should suspend statutory instrument (SI) 64 and 122, which restrict the importation of products such as cooking oil.

“At the moment, yes, to allow replenishment because while we have supported it through and through, retailers and wholesalers feel manufacturers have not met their end of the bargain and instead blame our sector for speculative behaviour to cover up for their failures despite all the support from government,” he said.

But Moyo said suspending SI 64 and 122 would spell disaster for the local industry.

“Firstly, the issue is that our agriculture sector is not producing enough so we end up importing more than we need to and demanding foreign currency for things we should simply produce or not consume. A small minority grouping of retailers are not willing to wait for corrections of fundamentals of low agriculture production output, this is unfortunate,” he said.

“If government accedes to their request we will create more pressure on the parallel markets and “street rates” will hit 10 on the back of increased demand to satisfy new import lines.

“The prices of goods like cooking oil at those rates will be at $30 for a 2-litre, which is unaffordable unless we raise salaries particularly of those in civil service, which are the biggest consumer group.

“This means government’s wage bill will rise and fuel the deficit and inflation will spiral out of control.”

He said they were awaiting more consultations where they could show the impact and how the country was benefitting from SI 64 and SI 122, including the agriculture sector.

Investigations by this paper also unearthed that large supermarkets were forcing customers to buy groceries worth $15 for them to be allowed to purchase cooking oil.