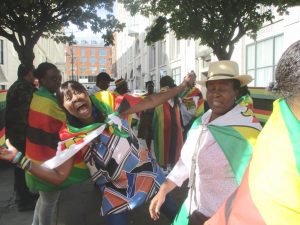 The sham solidarity with Mugabe shown by African leaders at his funeral is in sharp contrast to the enlightened attitude taken by the African Union over the plight of African refugees and migrants stranded in Libya on their way to Europe.

Thousands of them have drowned in the Mediterranean over the last decade, victims of people smugglers often acting in concert with Libyan officials. Others have been tortured to extract ransoms from their families or enslaved. Still others have died as victims of the civil war, such as 50 or so migrants in a detention camp in the Libyan capital Tripoli killed in July in an airstrike – unsurprising as the detention facility was also used as a militia base.

The European Union has been sharply divided over the migrant influx, not only from sub-Saharan Africa but also the Middle East and Asia. It will be pleased with the deal with the African Union under which five hundred African migrants will be taken to a refugee camp near the Rwandan capital Kigali. They will be gradually integrated into Rwandan society with a view to taking further groups of 500 up to a maximum of 30,000. A spokesman for the UN High Commissioner for Refugees hailed the plan as ‘a lifeline’.

Rwanda sets a good example to xenophobic South Africa whose President Cyril Ramaphosa was greeted with boos at Mugabe’s funeral. The London newspaper, the Times, observed: ‘In a capital city where power is off for most of the day, clean water runs only occasionally and basic foods cost five times as much as a year ago, mourners travelled through the night for the funeral today of the man who led Zimbabwe from prosperity to starvation. On one side of Harare lackeys from African embassies squabbled over the only presidential suite in the city’s best hotel as the continent’s heads of state flew in to pay their respects to Robert Mugabe their last liberation hero. Cyril Ramaphosa, the president of South Africa, is expected to attend the funeral, along with 12 other former and current African leaders. Across the city, police prepared to close down potholed streets around the funeral venue to make way for motorcades. The chaotic arrangements, fraught with rumours of witchcraft, backhanders and threats, have become a metaphor for the former president’s ruinous and divisive era.’

The funeral was barely over before normal life resumed in Zimbabwe. The Zimbabwe Hospital Doctors’ Association says its acting president, Dr Peter Magombeyi, has been abducted by suspected state agents. It said Dr Magombeyi had received several anonymous warnings after doctors went on strike for improved wages and better working conditions. Who knows, perhaps the African leaders might sit up and pay attention at last?