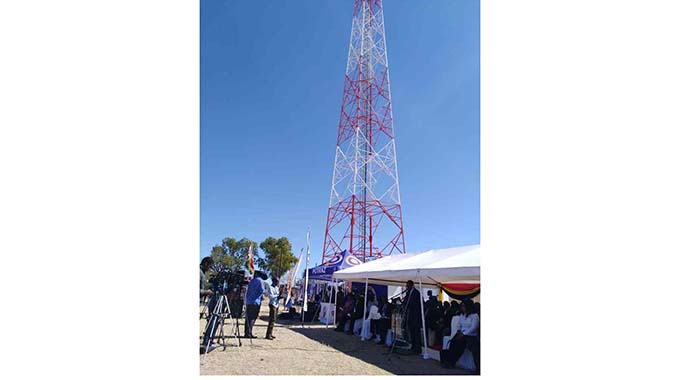 The Maitengwe Universal Services Fund (USF) base station commissioned in Bulilima West Constituency on Monday. The base station was built using funds from the USF and will be used by TelOne, NetOne, Telecel and Econet

Africa Moyo Business Reporter
The Postal and Telecommunications Regulatory Authority of Zimbabwe (Potraz) is pleading with Government to place it on the foreign currency priority list, as it seeks to ensure every citizen accesses communication.

The Reserve Bank of Zimbabwe (RBZ) created a foreign currency priority list, which is headlined by firms that produce goods for the export market.

Companies that import fuel are also on the priority list together with local firms that produce cooking oil and other key products that cannot be imported due to Statutory Instrument 64 of 2016.

“As we aim at and make giant strides towards 100 percent population coverage in Zimbabwe, we seek your assistance in securing the prioritisation of the sector in the allocation of foreign currency by the authorities,” said Dr Machengete.

“The internet and international bandwidth also require a stable supply of foreign currency. While we fully appreciate the difficulty that Zimbabwe is going through, we are, however, convinced that the sector can and should be notched up the priority list so that networks can be sustainable and consumers can continue to enjoy reasonable service quality and that ours remains a competitive ICT market in the region.”

Dr Machengete said this on Monday in Maitengwe, Bulilima West Constituency, where Potraz was launching the shared base station erected using resources from the Universal Services Fund (USF).

The Maitengwe USF base station will be used by TelOne, Econet, NetOne and Telecel.

Dr Machengete believes if foreign currency was available, players could expand their network to unserved regions and communities.

A number of areas in the country are not serviced or underserviced by both mobile and fixed phone companies.

Some parts of rural areas such as Mberengwa, Gokwe, Lupane, Tsholotsho and Jerera, have intermittent network problems in some cases because base stations are far away.

Failure by some sections of society to access communication services is deemed to be a violation of people’s rights to access of information.

Dr Machengete said if one needs to appreciate the centrality of ICTs in people’s daily lives, they need to “spend a day or two” in areas where there is no network coverage.

“In summary . . . without requisite foreign currency resources, network growth and functionality grind to a halt, quality of service cannot be guaranteed; regulation is rendered dysfunctional and ultimately consumers and
the economy at large suffer irreparable damage.”

ICT Minister Supa Mandiwanzira says Government policy is that all citizens should access ICTs considering that “almost everything” these days depends on ICTs.