Poverty is profound around with “hungry people…knocking at the parish gates” on a daily basis because of Covid-19. 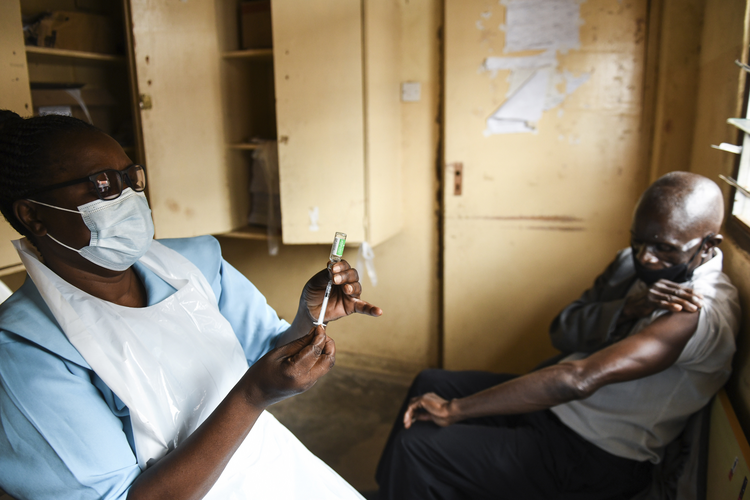 As lockdown restrictions and shuttered churches cut off typical parish revenue streams, Catholic priests in rural Africa have had to improvise, often resorting to unorthodox means to sustain themselves and their parish communities and churches.

Their counterparts in big cities have mostly managed to remain in touch with parishioners through social media and other online platforms that had been growing in popularity across Africa even before the pandemic. But the grinding poverty in many rural communities often means that parishioners cannot afford mobile phones or data plans.

Catholic Church News Zimbabwe reported this year that a priest in the rural Diocese of Gokwe had “survived on selling chickens and goats that he received” from parishioners before the lockdown.

Poverty is profound with “hungry people…knocking at the parish gates” daily because of Covid-19.

“People have completely forgotten about the parish, let alone checking on his welfare. He was not receiving anything from the people whom he said were equally burdened to make ends meet for their families,” the publication reported, describing an increasingly familiar story of near-impoverished rural priests and hard-pressed parishioners no longer able to support them.

In normal times, churches that produce agriculture products, like the Don Bosco Mission in Zimbabwe’s Mberengwa District in the Midlands Province, rely on sales at their local markets, but under lockdown measures, police were ordered to disperse even small crowds and it was impossible to sell chickens raised by the parish.

The Rev. Joaquim Chukucha had to think outside the box or, in this case, the bottle. When farm and poultry sales failed him, he established a small brewery at Don Bosco. Parishioners helped with the brewing and marketing of Don Bosco’s beer.

Father Chukucha turned to a dark sorghum brew favored by locals, known as “opaque” beer “because it is not as clear as lager beers.”

“This supported us very much,” Father Chukucha told Catholic Church News Zimbabwe. “Selling opaque beer is a lucrative business here because makorokoza,” as the region’s gold panners are known, “like it very much.”

Parishioners from Don Bosco said they endorsed the unusual venture in light of the difficult circumstances that Covid-19 had thrust upon the community and the church.

“How else do we raise funds? There were no funds to sustain the parish,” said one parishioner, Mairos Mangara. “Other households brew the traditional beer and make good sales, so it’s something that is already happening in the community, and we have no misgivings about participating in such a process for the benefit of the church.”

One priest in Zimbabwe turned to brewing a dark sorghum brew favored by locals, known as “opaque” beer “because it is not as clear as lager beers.”

Father Chukucha said he is now planning “to secure a [maize] grinding mill and to open a tuck-shop,” a mini-grocery, “so that we can generate income to support the needs” of the mission.

In neighboring Malawi, the Rev. Alfred Genesis Kalumbi from the Holy Angels-Matumba Parish in rural Dedza, about 50 miles south of the capital city of Blantyre, told America that he had “to resort to unusual and unorthodox means of survival.”

“As priests we have had to do lots of things by ourselves like working in tuck-shops and maize mills, laundry, cooking, guarding, etc. We had also to auction all the parish pigs to keep the parish going,” Father Kalumbi said. “At times, we had to work as transporters of farm produce and other items for survival.”

Over a year into the pandemic, more than 4.6 million confirmed coronavirus cases have been recorded in Africa, along with more than 120,000 deaths. During that time, African economies have contracted by 2.1 percent, according to the 2021 African Development Bank outlook report released in March.

Continental economies were pressured by civic lockdowns imposed by governments to fight the spread of the coronavirus. Movement restrictions imposed by African governments included limits on religious gatherings that ultimately affected parish and diocesan finances.

Some restrictions in Zimbabwe, South Africa and other African states have been relaxed recently, allowing religious gatherings of up to 50 people.

At St. Armand Parish in the Neno District of the Archdiocese of Blantyre in Malawi, self-sustenance is the new buzzword. The parish will be hiring out a mini-bus it recently purchased using proceeds gathered from a sale of maize donated by parishioners over the past two years.

“People here have land and are hardworking and generous,” said the Rev. Christopher Nakhate. “We used these strengths as our starting point.” He added: “We have managed to buy this coaster [mini bus]. We shall also decide on when and how to use it for hire as a way of generating funds,” Father Nakhate told local media.

According to Augostine Edan Ekeno, S.J., even before the pandemic, the financial situation at the St. Teresa Parish in South Sudan had been grim. Under normal circumstances, Sunday Mass collection “does not even reach $10,” he said.

But pandemic restrictions have meant that his parish is cut off even from that small revenue stream. Of course, that is not the worst of the experience from his perspective. Father Ekeno told America that he regretted being “unable to accompany” his flock during this most challenging period in his ministry. “Some Christians feel like the church has abandoned them in their hour of need,” he said. “The church is no longer present at funerals or visiting the sick in hospital.”

As vaccines become more available, rural priests in Africa are cautiously hopeful that the worst could be over. They have been encouraging parishioners to accept vaccinations.

“Our parishioners are poor people,” said Father Ekeno. “During the disturbance caused by Covid-19 in the past year, our parish continued to depend on the parishioners’ in-kind contributions” and volunteer labor from parishioners to keep up church properties and lands.

The United Nations said that South Sudan is “one step away from famine” because of violence, climate change and the effects of Covid-19, appealing for $1.7 billion to reach 6.6 million people in the country with food assistance and social protection measures.

For the Rev. Misrak Tiyu, a pastoral coordinator in Embidir, 112 miles southwest of Ethiopia’s capital, Addis Ababa, there were challenges beyond the pandemic to contend with after a brutal conflict erupted in the Tigray Region.

Father Tiyu said that priests and religious had to “live with the little” that they had on hand while programs like youth activities and formation programs for religious were halted. Most challenging for him as a pastor in the countryside was to persuade young people to stay home to honor Covid-19 precautions, “as they have no internet access to learn or study” from.

“It was depressing to keep children and young people at home,” said Father Tiyu. “Seeing the suffering of vulnerable people was particularly difficult.” He said that even as they lost work, many families were burdened with new health costs after family members became ill.

In areas where African traditional beliefs remain strong, Catholic evangelization and education programs had to shut down. This has meant a setback to the usual programs of evangelization. Sosthenes Luyembe, S.J., a parish priest in Muyeye, a community in the Diocese of Malindi in Kenya, said many Catholics there “still practice dualism, blending Christianity with their local belief” systems.

“Witchcraft and belief in witch doctors are strongly embedded in the hearts and minds of the local people. The big challenge as a priest in this area is how to uproot such beliefs from the local community and turn them to [becoming] single-minded, solid Catholics, trusting in the power of the one Almighty God,” he told America.

Amid these challenges, rural priests are heaving a sigh of relief that coronavirus infections and deaths that appeared to be escalating in January are declining now. Medical experts warn, however, that a third wave could still wash over the region.

Still, as vaccines become more available, priests in Africa are cautiously hopeful that the worst could be over. Like other rural priests, Father Luyembe has been encouraging parishioners to accept vaccinations.

They are looking forward to the resumption of Mass and other church programs once governments relax restrictions—a far cry from experiences last April when 13 nuns and two priests in Kenya were arrested for conducting a secretive evening Mass at Christ the King Catholic Church in the Kenyan town of Bungoma.

In Ghana more than 420,000 people had been vaccinated by mid-March, a number that the World Health Organization said “covers more than 60 percent of the population targeted in the Greater Accra” region. Elsewhere in Africa progress on vaccinations is slow.

Covid-19 vaccines could be “the light that we are all beginning to see at the end of this dark period,” Father Ekeno said. But, he added, they “must be accessible, affordable, ethical and effective.”

“Human life matters no matter where one lives or their social status.”