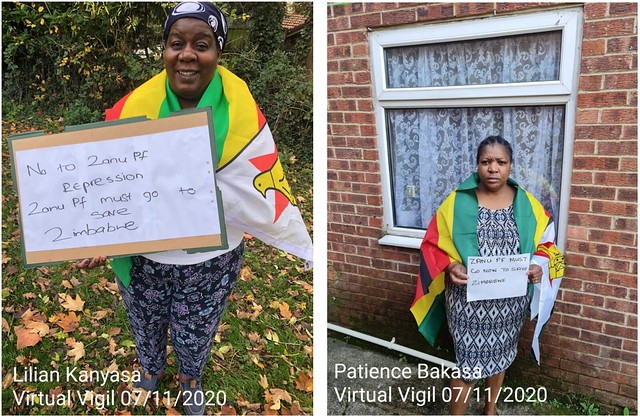 The drama over the US presidential election, with long delays in releasing the results and angry disputes between the Republicans and Democrats, prompted a Vigil supporter to comment: ‘They could learn from Zimbabwe where they find it more efficient to count the votes before the election’.

This view was supported in a tweet by Samantha Power. US Ambassador to the UN under President Obama, who commented about President Trump’s behaviour: ‘He’s going the full Mugabe’. (See: https://www.independent.co.uk/news/world/americas/us-election-2020/trump-2020-election-robert-mugabe-samantha-power-electoral-fraud-b1632130.html.)

Zimbabweans remember the prolonged delay in announcing the election results in 2008 while Zanu PF discussed what to do about their disastrous showing at the polls and how to rearrange the outcome. This was so unconvincing that South Africa had to step in and force a government of so-called national unity.

Since then, with the help of Nikuv the Israeli election rigging specialists, they have taken care they need no longer fear any unexpected outcome. The Election Commission with  military assistance ensures that everything goes efficiently.

The courts have gone the same way. The Chief Justice would like decisions to be made before the courts sit. This is much more convenient and reduces any disagreement about the outcome – except of course by the accused. But they would say they are innocent, wouldn’t they?

Zanu PF reasoning is that the president decides the national consensus and that there must be an end to the embarrassing protests and the anti-government propaganda. Look they say, how well it works in China where people work in harmony for the betterment of the people – except for ‘foreign-sponsored dissidents’.

The fate of the valiant journalist Hopewell Chin’ono shows all too clearly how Zanu PF plans to follow the Chinese model – endless harassment and arbitrary imprisonment for exercising his constitutional rights.

Chin’ono was arrested in July for exposing government corruption and held in the Chikarubi high security prison pending trial on the spurious charge of inciting violence. He was released on bail only in September but rearrested on Tuesday for breaking his bail conditions – apparently including comment on the case of Henrietta Rushwaya, the President of the Miners’ Federation arrested for trying to smuggle gold to Dubai.

Chin’ono was brought to court in leg irons late on Thursday, which his lawyers said was a deliberate tactic to delay proceedings and ensure the hearing was postponed. The European Union representative in Harare said exposing corruption was not a crime and Chin’ono’s detention sent a ‘chilling signal on freedom of opinion and expression in Zimbabwe’. (See: https://www.theguardian.com/world/2020/nov/06/zimbabwe-journalist-hopewell-chinono-has-bail-hearing-postponed).