The horror behind Zimbabwe’s internet shutdown

Faced with fuel protests, Pres Mnangagwa’s government has used deadly force against civilians. These atrocities are committed behind an internet shutdown 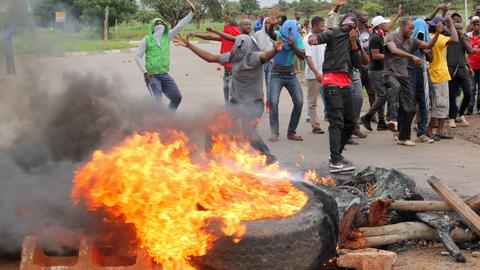 I think of how famished for hope we were last year that most of us caressed the scars of Mugabe’s noose on our strained necks and tucked the red razors of our bloody past – unpast under our tongues, clogged the streets in our best clothes, we: so much wanted a new dawn we were willing to forge on, how in celebrating Mugabe’s removal we even: took selfies with the soldiers, broke-bread with the soldiers, shimmied to Soul Jah Love with the soldiers, who are also our brothaz and sistaz and fam who suffer like we do. Not too long after, I spent the last half of the year living in Zimbabwe, and drinking the bitter tea of yet another dream deferred through an election rigged (as always) by Zanu PF, the government such a total failure the dream deferred would surely explode — it was on the horizon; even the stones could smell the inevitable fires from fuel lines in which I learned to proper queue, humbled by the impossible grace of my people, my body learning all the postures of waiting, wondering how long till the people’s patient patience wore off.

On Monday, the bough was broken (by Mnangagwa himself, through a 150+% fuel price increase) and those fires on the horizons, well, they lit. In the wake of indiscriminate terror unleashed by Zanu PF’s military (as usual) in response to violent demonstrations by a drowning people at the mercy of a callous government that has led them down in every aspect, “12 are confirmed dead, 78 gunshot wounds, 466 arrests and detention.” Some of these atrocities were committed under an internet shutdown that left the people disconnected from the world and unable to tell their stories on social media… the internet shut down continues.

BUT there is this: the excessive use of force on the people, the only language that Zanu PF knows in handling conflict, will not put Zimbabwe’s fires out, or solve the ongoing crisis. It will also not silence us. Bleeding and wounded and mourning the dead we are, but we will not be cowered or broken — we still want and deserve a better country, the percussion for our freedom will not stop until that country is here. May the political players who are in solidarity with the people work together to provide the much-needed direction, dialogue, and leadership in Zimbabwe’s predicament – this will not come from Zanu PF but we do need a game plan. And most importantly, may the struggle against our liberator turned oppressors, a government that hates its people, not let up till we are truly free; our liberation is our right even as the government acts like it isn’t. Sooner or later, this terrible regime too, will explode.

Newer Post
Tocky Vibes blasts army, police for killing civilians in song
Older Post
Useful to know if Masiyiwa and Khupe have had a change of heart on ED