The longest journey home to Zimbabwe

Tsitsi, a Zimbabwean living in Johannesburg, spent five-and-a-half days travelling home to see her children for the first time in 20 months. Because she has comorbidities, she opted to hitch a ride with someone instead of taking the bus. 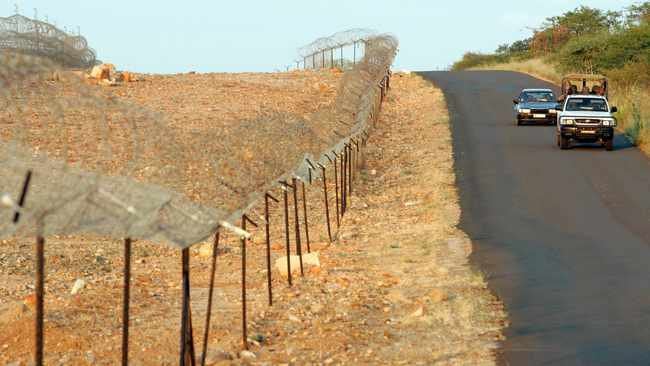 A SANDF vehicle followed by a civilian car patrols the at Beitbridge Border Post fence between South Africa and Zimbabwe in Musina. File picture: Themba Hadebe/AP

Shannon Ebrahim recounts the story of Tsitsi, a Zimbabwean living in Johannesburg, who spent five-and-a-half days travelling home to see her children for the first time in 20 months. Because of the fear of contracting Covid-19, Tsitsi, who has comorbidities, opted to hitch a lift with someone instead of taking the bus.

The last time Tsitsi saw her young children in Zimbabwe was 20 months ago – when she left Johannesburg to make her annual trip home in December 2019. With the onset of the Covid-19 pandemic, it has been exceedingly difficult to make it home to see her young daughters.

Tsitsi had no choice but to look for work in South Africa in 2007 when the economy in Zimbabwe collapsed, her home was bulldozed by the government in Operation Murambatsvina, and her family was left destitute. Then-president Robert Mugabe had deemed her informal settlement a hotbed of opposition, and had ordered that it be raised to the ground. Everything she had ever worked for had gone up in smoke.

Either she came to South Africa to earn an income, or her family would have starved, as there were simply no jobs in Zimbabwe. Since then, she has spent 14 years working in early childhood development in Johannesburg, but unlike other foreigners who can apply for permanent residence after five years, Zimbabweans never seem able to secure permanent residence despite ongoing attempts.

It is estimated that there are over five million Zimbabweans living in South Africa, almost all of whom will at some point during the course of a year want to make the journey by road back to Zimbabwe to see their families, and bring much needed supplies that are too expensive or unavailable in Zimbabwe.

Tsitsi set out to make the long journey home last week, but this time the trip would be very different. As a 48-year-old with a number of comorbidities, she couldn’t risk boarding a bus with 40 other people, when the windows of the bus don’t open and the passengers are unlikely to keep their masks on for the 19-hour journey. So she had to travel by bakkie with a driver who regularly transports goods to Harare to minimise the risk of contracting Covid-19.

The drive from Johannesburg to Musina was slow going pulling a massive load in a trailer of much needed goods for their families. They were stopped by the police countless times on the way to Polokwane, and, in order to proceed, had to pay bribes. By 10pm they had to pull over at a petrol station near Polokwane for the night due to the curfew, and sleep in the vehicle. The next morning they set off at 4am and made their way to the border, but hours later found themselves behind a massive line of trucks inching towards the Zimbabwe border. There were well over 50 trucks ahead of them.

The snaking line of trucks moved towards the border at a snail’s pace , and after sitting in their vehicle for what seemed like an eternity, 24 hours later their vehicle had only progressed five kms. Feeling desperate and exhausted after having already travelled for three days, Tsitsi couldn’t face a third night sleeping in the bakkie that was now stopped as the evening curfew had brought the line of traffic to a standstill. She escaped on foot to a roadside accommodation some kms away to try and rest before returning to the vehicle in the early hours of the morning.

The next day it took another 13 hours to reach the border which was only a few kilometres away, as every single truck was being searched for goods that could have potentially been looted during the recent unrest in South Africa. When they finally reached the border, they had to transfer all the goods in the trailer they were pulling into a commercial truck as passenger vehicles were told they were not allowed to haul any goods.

Lines of passenger vehicles were littering the border area at Musina, and people said many of them had been stuck waiting at the border for as many as seven days, as private vehicles carrying goods were not allowed through. The scene was one of desperation and human misery.

As Tsitsi looked at the exasperation of her compatriots, many of whom had run out of food and had nowhere to sleep but in their vehicles, she wondered what had happened to the notion of the African renaissance, of regional solidarity, and the freedom of movement for people in the Southern African region. For those on the ground it was a completely different reality. There were no news reports or social media frenzy of the chaos on the border with Zimbabwe, perhaps the world would have only noticed if something was set on fire.

Tsitsi was still facing a further 10-hour journey by road to Harare. Someone at the border informed her that the Covid-19 curfew on the Zimbabwean side of the border was 6pm, and so she would face yet another night sleeping in the stationary vehicle before they could even try to proceed on their journey. The next morning, the driver she was travelling with was prevented from crossing the border with his empty trailer, and Tsitsi had no choice but to hitch a ride in a commercial truck for the rest of her journey.

By the time Tsitsi reached Harare, she had spent five-and-a-half days travelling by road. Her hope for the future had gone, and there was no end in sight to the nightmare that is the reality for Zimbabwean migrants who just want to visit their family.