The rise and fall of Grace Mugabe 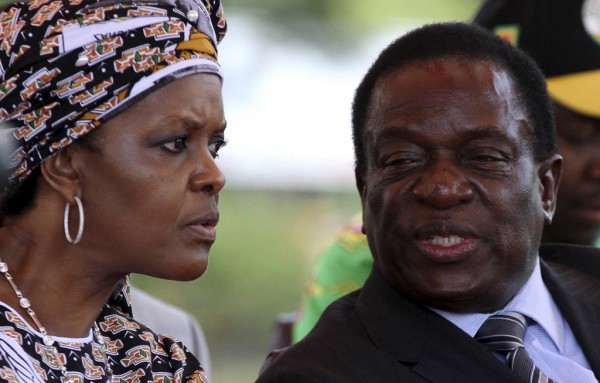 Source: The rise and fall of Grace Mugabe – The Zimbabwe Independent November 17, 2017

WHEN President Robert Mugabe exchanged nuptials with Grace Marufu amid pomp and fanfare in August 1996, few would have guessed that she would after two decades make such a dramatic impact on the country’s political landscape. 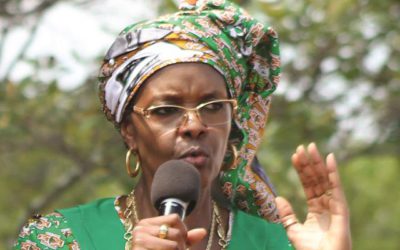 Just a typist at the Office of the President and Cabinet, Grace married Mugabe in an extravagant ceremony, making her the country’s First Lady. In recent years, her influence had risen as she had become the power behind the throne.

Until this week’s dramatic events which saw the army holding Mugabe hostage and arresting ministers linked to Grace’s G40 faction, she had become a major influence in her husband’s political career.

Grace’s relationship with Mugabe reportedly blossomed at the time the President’s first wife Sally Mugabe was terminally ill and the two had their first child, Bona, out of wedlock in 1990.

Other than Bona, the two have other children, the two troublesome boys Robert Jr and Bellarmine Chatunga known for their extravagant lifestyle and partying.

The First Lady is also as extravagant as her children, and for a long time, was known for her love for the fine things in life, hence the nickname “Gucci Grace”.

Other than her opulence she was well known for her penchant for travelling, accompanying her globe-trotting husband to almost every country he visited.

She was once a regular at London’s famous designer clothing store, Harrods. At one point she demanded that the department store shut its doors to other customers to enable her to shop in privacy.

In early 2002, before European Union sanctions on her family and their cronies, she blew US$120 000 while shopping in Paris, according to French and English tabloids. Recently, she spent US$1,4 million on a diamond ring.

Grace Mugabe had over the years grown into a powerful politician and businesswoman while seeing herself as a philanthropist.

The First Lady owns a dairy, a massive double story building, an orphanage and large tracts of land in the picturesque Mazowe area of Mashonaland Central.

Grace and her family also own more than 10 farms, and are part of the new land aristocracy ushered in by government’s chaotic land reform programme which began in 2000.

Grace entered politics on a full-time basis in 2014 after being appointed secretary of the women’s league at the Zanu PF congress.

Prior to her appointment she had embarked on a “meet-the-people tour” where she vilified former vice-president Joice Mujuru accusing her of plotting to unseat her husband.

At Grace’s instigation, Mujuru was expelled from Zanu PF alongside hundreds of her allies among them the party’s secretary for administration Didymus Mutasa and spokesperson Joice Mujuru.

Relations between the military and the first family soured as a result, prompting Mugabe to attack security officials for meddling in Zanu PF internal affairs at the party’s annual conference in Victoria Falls in December 2015.

Mugabe then met army commanders the same evening to defuse the tense situation, but tensions continued to grow mainly because of Grace’s incessant attacks of Mnangagwa and the military.

In February last year, Grace’s then ally and outspoken Sarah Mahoka accused Mnangagwa of factionalism and challenged him to speak out.

She called him a duck which just quacks as its ducklings perish.

At a rally in Chiweshe, also in February, Grace claimed that the military wanted to kill her son Bellarmine and bomb her Alpha Omega dairy.

Mugabe again met army generals to discuss problems, fuelled by Grace’s attacks targeting the army.
In October, at a rally at Sakubva Stadium in Mutare, Grace said she was not afraid of being shot by Mnangagwa’s allies.

Her campaign against Mnangagwa escalated ahead of the party’s extraordinary congress slated for December, where she led for a campaign for the former vice-president to be dismissed from both the government and Zanu PF party and before the congress.

Indeed Mugabe obliged and sent Mnangagwa packing. A process to boot out or limit the influence of his key allies such as finance minister Patrick Chinamasa was put in motion.

Many saw the development as a confirmation that Grace was indeed the power behind the throne.

It did not take the G40 faction too long to influence the party’s provincial structures to declare that they wanted Grace to take over the vice-presidency at the party’s congress.

According to Grace she had “arrived” and to her she would soon become the country’s second most powerful individual after the president.

Grace and her acolytes’ plan was progressing well until Zimbabwe Defence Forces commander General Constantino Chiwenga on Monday called Mugabe to order and directed him to stop the purges ahead of the extra-ordinary congress.

Chiwenga warned that the military could “step in” to stop a threat to national security.

He warned politicians to stop recklessly denigrating the military, in remarks seen as directed at Grace. Unfazed by Chiwenga’s statements, Zanu PF Youth League secretary Kudzanayi Chipanga called for a press conference accusing the army of looting proceeds from diamonds.

The military then stepped in between Tuesday night and Wednesday morning, holding Mugabe hostage and arresting Grace’s key allies while others went into hiding, signalling that the first lady has lost her grip on power.

Law lecturer at Kent University in England Alex Magaisa said the statement by the military marks the end of an era.

“The last straw for most people within and outside Zanu PF was the increasingly evident possibility that Mugabe’s wife Grace was well on course to succeed him. That would have created a Mugabe dynasty. Many found the idea of a Mugabe dynasty extremely repulsive,” said Magaisa.

“There might have been a residue of sympathy for Mugabe, but many were repulsed by Grace’s brand of politics. She was brash and condescending, with a penchant for humiliating adults in public. Many dreaded the prospect of her presidency.”