“The situation is unbearable”: Life under Zimbabwe’s economic crisis

Zimbabweans may be divided politically, but they are united in suffering the consequences of scarce goods and soaring inflation. 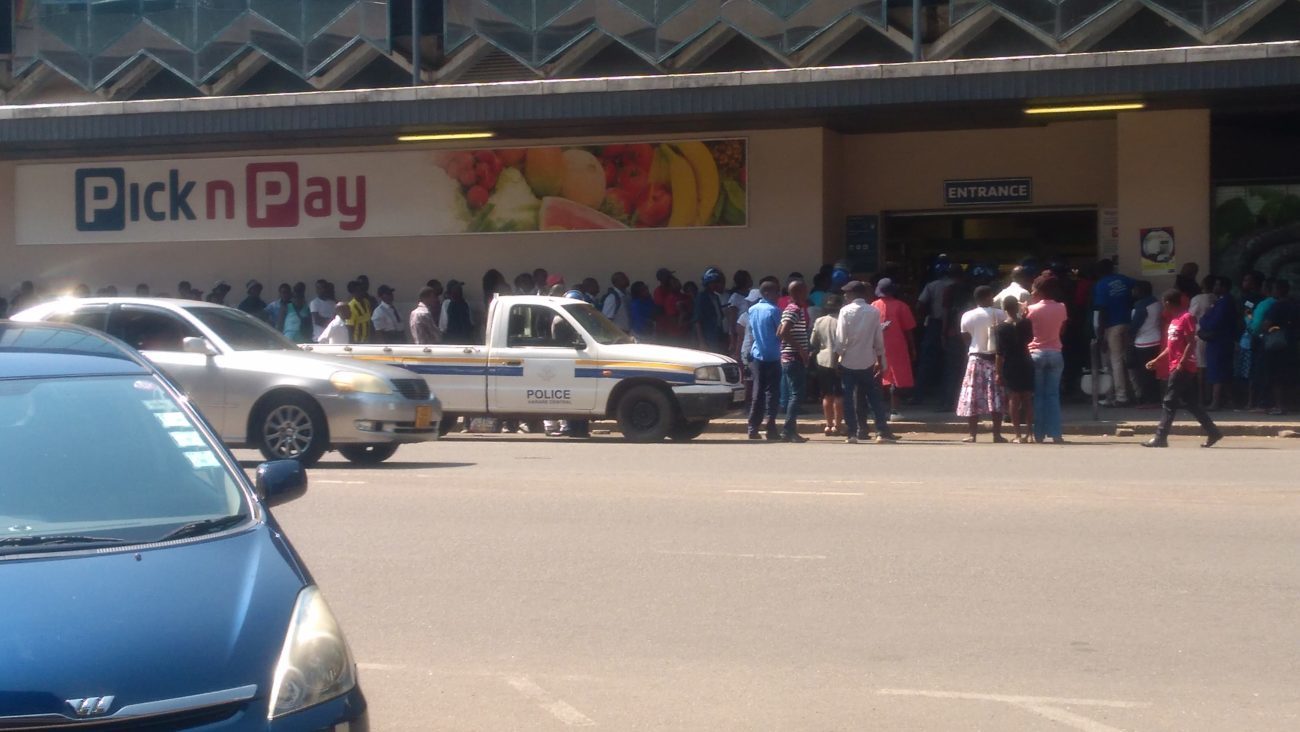 Long queues outside a supermarket in Harare. Credit: Elia Ntali.

Outside a Pick n Pay on Jason Moyo Avenue in Harare, a frustrated crowd has gathered. The supermarket’s security has shut the steel doors to the shop, but people continue trying to force their way through. It is only when the police are called that order is restored.

The reason for the commotion is that a rare commodity, which has been almost impossible to find for weeks, is finally on sale: cooking oil.

Elsewhere in the capital and across Zimbabwe, similar scenes have been unfolding recently. The country is in the midst of an economic crisis. Banks lack foreign currency to lend to businesses, leading many to simply close down.

This has led to a situation in which several essential goods have become scarce and inflation has soared. The Zimbabwean bond note, which is officially on par with the US dollar, has been trading at 5-to-1 or even 10-to-1 according to some reports.

Everyone in Zimbabwe is feeling the effects.

Tapiwa Chitakunye, for example, has been struggling to buy medicine for his mother. “The situation is unbearable,” he says. “At some pharmacies, they are saying they have run out of nifedipine, whilst those who still have it are charging exorbitant prices.”

“I used to have a budget of $26 per month for transport and now it has tripled,” says Roselyn Magaya, who used to commute from the town of Chitungwiza into Harare. “I decided to leave my job after my employer told me that there was not going to be any salary increase, because he was also feeling the pain.”

Zimbabwe’s economy is straining under the weight of mismanagement, over-spending, debt accumulation and corruption over decades. Former president Robert Mugabe presided over much of this decline, but little has changed since his removal in November 2017.

His successor Emmerson Mnangagwa has repeatedly promised to break with the past and revitalise the economy since coming to office, but things have continued to worsen under his watch. Zimbabwe may have been divided politically in the disputed July elections – in which Mnangagwa narrowly won with 50.8% – but it has been united in its economic woes.

There have been no radical changes to Zimbabwe’s centralised economic system, which allows extensive rent-seeking from elites. Meanwhile, the country remains in arrears to international financial institutions, making a bailout from the International Monetary Fund unlikely as things stand.

The government has taken some measures in response to the latest troubles. It has amended import and export controls – most recently lifting some restrictions on businesses bringing in goods from neighbouring countries – and it has clamped down on informal money dealers. Zimbabwe’s central bank recently suspendedfour senior officials accused of fuelling black market currency trade.

At the start of October, Mnangagwa’s administration also introduced a 2% tax on internal electronic money transfers in order to raise taxes. This received some praise in some quarters, but others suggested it would simply drive commerce underground and undermine consumers’ and financiers’ confidence in the government.

“A recipe for disaster”

In addressing the ongoing crisis, President Mnangagwa has attempted to present the problems as a necessary side-effect of reforms. “The liberalisation of the economy has its pains, and this is one of the pains that we are going to go through,” he has said.

But there are concerns that the real reforms Zimbabwe need have yet to be implemented and are not on the table. As citizens feel the effects of this, many have lost faith in the government of the ruling ZANU-PF and believe others need to be brought in.

“The lack of political will continues to suppress us as citizens,” says architect Collins Gwezuva. “We seem to be more concerned with our political parties than the country…The only way out of this predicament is for President Mnangagwa and [opposition leader Nelson] Chamisa to engage for the good of the country.”

“It is high time political leaders put their differences aside and focus on rebuilding the country,” adds omnibus operator Terrence Murozvi.

Without a significant change of direction, political or not, Zimbabweans will continue to feel the pinch. In both urban and rural areas across the country, millions of people are struggling under the effects of severe shortages of basic goods and rapidly rising prices reminiscent of the 2008-9 hyperinflation.

As ever, it is ordinary Zimbabweans that are bearing the brunt of the crisis, and many are already thinking seriously about how they will cope if things do not improve soon.

“The current situation is harsh, more people are losing their jobs and it is a recipe for disaster,” says accountant Elvis Ncube. “What it means is that many will be forced to migrate into neighbouring countries”.