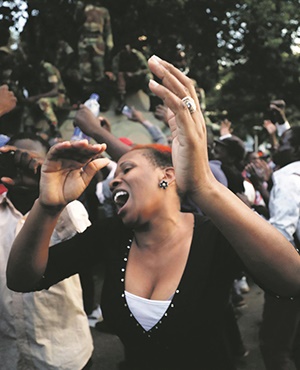 One of the first signs that a country is sliding towards dictatorship is when its government starts accusing critics, activists and the media of colluding with foreign elements in order to usurp state power for nefarious international interests. This accusation then gets regurgitated until it sticks to vulnerable citizens, giving government a licence to round up its critics, suppress political opponents and silence journalists who are now categorised as “enemies of the people”.

Robert Mugabe, now former president of Zimbabwe, took this self-induced paranoia about international forces seeking to undermine his government to extreme levels, seeing enemy agents on every street corner and using the security apparatus to harass people and so, apparently, subvert international collusion.

This paranoia always coincides with the incumbent’s waning political power. It is a desperate attempt to revive lost popularity and people’s confidence. It is usually delivered with great zealotry – recruiting new believers that chant the semi-patriotic themes and drawing lines in the sand – where any sign of empathy or logic is seen as weakness and lack of resolve.

At a rally in southern Zimbabwe in the run-up to the 2008 elections, the toughest elections Mugabe ever faced, he said: “They want to turn this country into a British colony again, and I urge you to demonstrate to the world again that their chosen puppets have no support and will never rule this country.”

Knowing that he would struggle with the urban population with this illogical reasoning and misdirection, Mugabe’s last hope was with the rural community.

A journalist who travelled the rural parts of Zimbabwe realised that the message Zanu-PF supporters were taking to those voters had not changed since the previous vote in 2005. They were saying Zanu-PF is the only trustworthy custodian of black interests and that the opposition is made up of stooges sponsored by Britain and Zanu-PF’s enemies in the West.

This mischief and misdirection has been used by many African dictators, from Paul Biya of Cameroon to General Sani Abacha of Nigeria, from Sekou Toure of Guinea to Omar al-Bashir of Sudan and, most notoriously, General Idi Amin Dada of Uganda.

Even the ANC has not been absolved from growing this self-induced paranoia and misdirection in the last year, due to its declining political fortunes. In its discussion documents released before the national policy conference, the sub-committee on security and stability said: “There is a concerted effort by many foreign state and non-state actors who have launched an aggressive onslaught to former liberation movements in our region.”

The document’s authors continue: “During the past year, they continued their efforts, in close collaboration with negative domestic forces, to undermine our democratic and constitutional advances. The modus operandi of [foreign intelligence services] is through penetration, influencing, manipulation and ultimately subversion in the quest to advance and promote their national interests.”

Shortly after these documents were released, I expressed my lamentation about these assertions because I already knew what they represented: a government that was becoming intolerant to criticism and which was painting its critics and political opponents as enemies of the state and the people. I knew these assertions would never be sustained when subjected to scrutiny because they were not based on any fact or evidence, but instead represented a broad set of sentiment that conspiracy theorists throw around.

As predicted, when then minister of state security David Mahlobo was subjected to media scrutiny at the policy conference and asked to prove these assertions, he crumbled and made a mockery of himself and our organisation.

The truth, however, as expressed by more gifted politicians who are conscious of the need for international forces not to interfere in other countries’ internal affairs, is that “we fool ourselves in thinking that we must learn to watch others die with equanimity”. There is no responsible international community which would stand idle, in the name of non-interference, when people are being slaughtered by their own government merely for expressing different views and seeking a different government.

In his book The Audacity of Hope, former US president Barack Obama states: “In almost every successful social movement of the last century, from Gandhi’s campaign against British rule to the Solidarity movement in Poland to the anti-apartheid movement in South Africa, democracy was the result of a local awakening. This is understood as the only legitimate and sustainable change of any country, when it’s done by its own people.”

Obama equally states: “No person, in any culture, likes to be bullied. No person likes living in fear because his or her ideas are different. Nobody likes being poor or hungry, and nobody likes to live under an economic system in which the fruits of his labour go perpetually unrewarded.”

It is this reality, more than anything else, that is always the reason for people’s revolt against any government – when people feel government has squeezed them into submission, unable to dream and unable to use their God-given talent.

When a foreign country speaks out against what it considers a violation of human rights, that is not interference. As Dr Martin Luther King said: “Injustice anywhere is injustice everywhere. When a foreign country condemns unfair and lack of free elections in any country as expressed by independent observers, that is not interference. When a government suppresses civic participation of its own people, all citizens of the world must condemn that government and that could never be deemed as interference.”

If there is any lesson to be taken from the Zimbabwe saga, it is that when your people-given time to lead is up, you must bow out with grace and find other ways to serve.