Zanu(PF)’s strategy is simple: confuse, intimidate and wear everyone out. They understand that nothing works in favor of the oppressor more than the confusion, fear and fatigue of the oppressed.

Source: The world is not impressed by the delusions of grandeur of Zanu(PF) leaders – The Zimbabwean 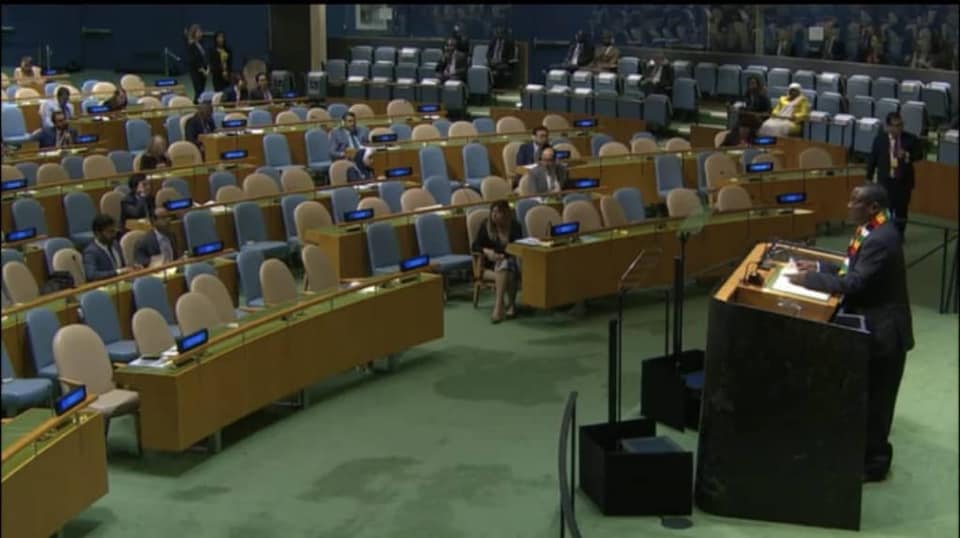 They have a lot of help they don’t need from many on the other side who parrot their arguments in the name of pan-Africanism, latter-day champions of a futile fight against imperialism who think its less urgent to hold our own leaders accountable for their gross violations of our constitutional rights than to prove that global powers are ill-intentioned towards Zanu(PF).

Mnangagwa sang the same tired song at the UN in his usual uninspiring way, too intoxicated by self-importance to recognize that those empty seats were evidence that the world is simply not impressed by the delusions of grandeur of Zanu(PF) leaders.

Our leaders’ arrogant belief in their own superiority, greatness, intelligence and importance even in the face of overwhelming evidence to the contrary is not a great strategy to attract investment to our country.

It really makes no difference that in their ranks is Mthuli Ncube, formerly employed by Quantum Global, an organization whose founder Jean Claude Bastos de Morais was recently arrested along with Jose Filomeno dos Santos, the son of the former Angolan President on suspicion of embezzling half a billion dollars from Angola’s Sovereign Wealth Fund.

All evidence points to our government not just being brutal, but a criminal enterprise which openly violates its own laws, defies court orders and diverts billions of dollars of taxpayer monies into the hands of people like Tagwirei, Chivayo et al. Our leaders believe organizations like the IMF are too stupid to be aware of this, and that they can continue to be supplied with power by ESKOM and others even though they don’t pay their debts while chartering expensive planes to go on pointless international junkets.

Almost two decades ago, the Arbinger Institute published a seminal book titled “Leadership and Self-Deception” where they wrote:

“Self-deception blinds us to the true cause of problems, and once blind, all the solutions we can think of will actually make matters worse. Leadership is about making matters better. To the extent we are self-deceived, our leadership is undermined at every turn.”

The Institute could get some rich pickings for a second book on the same subject by studying the self-deception of Zanu(PF) leaders and those who justify their madness.

It is their self-deception, not a Third Force, sanctions or imperialism that undermines everything they do.

It is their self-deception that makes them believe we have the strongest currency in the region when our economy is dead.

It is their self-deception that makes them believe the applause of the Herald and the ZBC for torching the forest to catch a rabbit and burning the house down to kill a rat actually makes them great leaders, statesmen and revolutionaries.

History has proven over and over again that self-deception invariably leads to self-destruction. Unfortunately, it has also proven that there are many innocent people and whole countries who are destroyed in the process.

Three years ago, I encouraged Zimbabweans to make their relatives in the security services understand that it’s legal to disobey illegal orders, and illegal to obey illegal orders. We have other conversations we must have with people in our circles who have been taken in by the propaganda that what we are experiencing in Zimbabwe is the fault of America and Western European powers.

The people who fan the dangerous delusions and megalomania of Zanu(PF) leaders are not just the well-known Zanuoids, but those who like and retweet the propaganda that the demand by Zimbabweans for the full restoration of their constitutional rights is the work of Western agents, and that anyone exposing the corruption of fellow Africans is unAfrican.

The challenge for Zimbabweans to remain clear-eyed and resolute, to never forget who the real foe is and to be absolutely determined to see the demise of this wickedness is a very serious one. I personally no longer differentiate between Matemadanda and the agents of confusion in our circles (relatives, friends, fellow party and WhatsApp group members at home and in the diaspora) who believe Zanu(PF) is being victimized by global powers through sanctions, and want all of us to feel guilty about that.

Our government is a victim of nothing and no one else other than its own self-deception, corruption and greed. Nothing has changed since Chris Mutsvangwa pointed out before Mugabe’s ouster that
sanctions were an excuse to cover up for corruption, incompetence and lack of imagination.

Just to be clear: the Zimbabwean people are the victims of this brutal government.

Let me repeat what I wrote earlier this week. As we Zimbabweans love to say: “Dzokororo ine simba”: I am no longer willing to allow those who imply that not joining the anti-sanctions bandwagon is being unpatriotic or unAfrican to get away with their bullying and idiocy. Making Zanu(PF)’s message (and that of the December 12 movement goons they hire in the US to demonstrate on their behalf) my own is not my priority. The idea that that is how one proves one’s pan-African bona fides is foolish in the extreme. Mnangagwa was given the opportunity to chart a different course in November 2017 and squandered it. He must fight for sanctions to be lifted by removing every single excuse for them to still be in force. Only then will he have the moral right to demand that all Zimbabweans stand with him in that fight.

We as citizens have one responsibility: to refuse to be confused, intimidated ad wearied and to press on until our true emancipation is realized, with or without our relatives, friends, party and WhatsApp group members.

Is there not a cause?