Then and now: When silence descended over Victoria Falls

Victoria Falls is one of the natural wonders of the world, yet in 2019, it fell silent.

Source: Then and now: When silence descended over Victoria Falls – BBC News 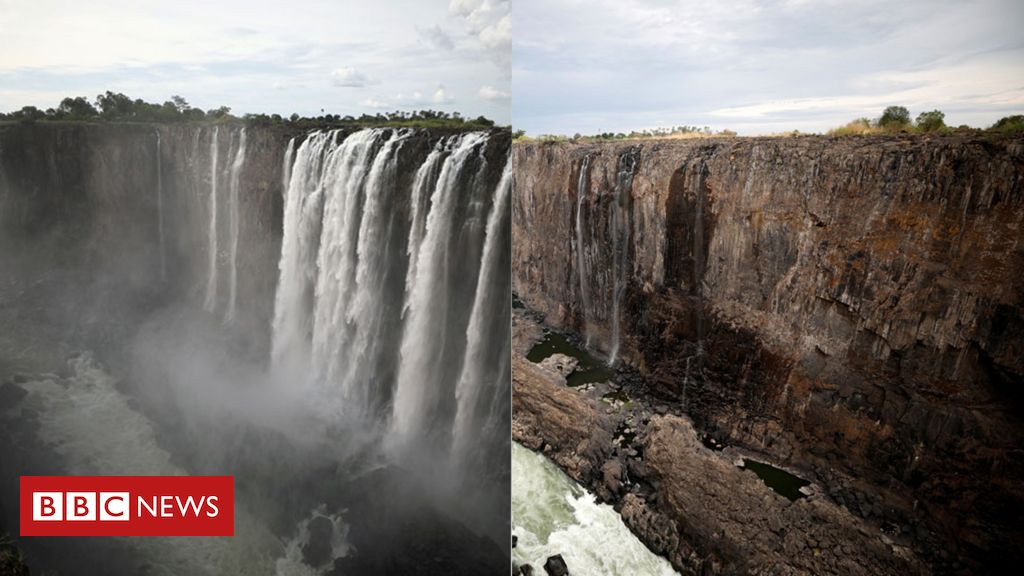 In our monthly feature, Then and Now, we reveal some of the ways that planet Earth has been changing against the backdrop of a warming world. Here, we look at the effects of global heating on Victoria Falls, one of the natural wonders of the world – and how Sub-Saharan Africa is learning to cope with the climate crisis.

In full flow, Victoria Falls easily qualifies as one of the natural wonders of the world. Spanning 1.7km at its widest point and with a height of more than 100m, locals refer to Africa’s greatest waterfall as “the smoke that thunders”.

This amazing feature is formed as the Zambezi river plunges into a chasm called the First Gorge. The chasm was carved by the action of water along a natural fracture zone in the volcanic rock that makes up the landscape in this region of southern Africa.

In 2019, however, Victoria Falls was silenced.

In a drought described as the worst in a century, the flow of the Zambezi was reduced to a relative trickle and the Falls ran dry.

As one of the region’s biggest attractions for tourists, Victoria Falls is a valuable source of income for Zimbabwe and Zambia. As news of the low waters spread, local traders noticed a visible drop in tourist numbers.

As well as hitting the countries’ economies, it also hit electricity supplies, which are dependent on hydroelectric generation.

More widely across the region, agencies reported an increase in the need for food aid, as crops failed in the drought.

A single extreme weather event cannot, in isolation, be viewed as a consequence of climate change.

But the region is recording a sequence of extreme droughts that reflect what climate modellers have predicted will occur as a result of an increase in greenhouse gases in the world’s atmosphere as a result of human activity.

Zambia’s President, Edgar Lungu – speaking at the time – called it “a stark reminder of what climate change is doing to our environment”.

Observers of weather patterns in the Zambezi Basin believe the changing climate is resulting in a delay to the monsoon season, concentrating the rains into bigger, more intense events.

This makes the storage of the water in the region more difficult, and makes the impact of the extended dry season more damaging to people and the environment.

The UN’s State of the Climate in Africa in 2019 report painted a worrying picture for a continent that could see its population double over the coming century.

Speaking at the report’s launch in October 2020, World Meteorological Organization secretary-general Petteri Taalas observed: “Climate change is having a growing impact on the African continent, hitting the most vulnerable hardest, and contributing to food insecurity, population displacement and stress on water resources.

“In recent months, we have seen devastating floods, an invasion of desert locusts and now face the looming spectre of drought because of a La Niña event.”

The report adds that 2019 was among the three warmest years on record for the continent.

It warns that the warming trend is expected to continue.

The worrying fact facing politicians, policymakers and civil society is that the continent is set to be hardest hit by climate change, yet the continent’s capacity to adapt to the realities of a warming world are low.

Areas of concern include water supplies, health, food security, droughts and floods, biodiversity. It is a list of concerns that is continuing to grow.

Africa is on the front line of the battle against dangerous climate change.

Our Planet Then and Now will continue each month up to the UN climate summit in Glasgow, which is scheduled to start in November 2021