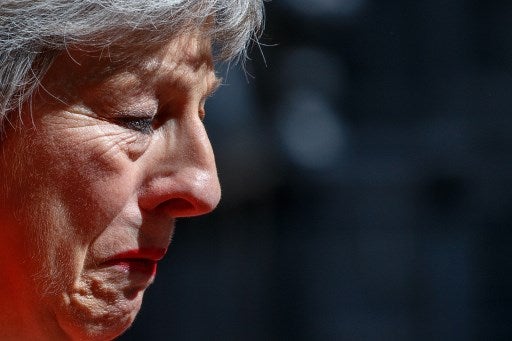 The Conservative leader won praise for her determination and ability to survive what often felt like a three-year political crisis since the referendum vote.

Battered British Prime Minister Theresa May’s short but dramatic tenure will be ending after her legacy-defining battle to win parliamentary approval for her Brexit deal proved too elusive.

May on Friday announced she will step down as Conservative leader on June 7.

“It is and will always remain a matter of deep regret to me that I have not been able to deliver Brexit,” May said in a statement outside her Downing Street residence.

The Conservative leader won praise for her determination and ability to survive what often felt like a three-year political crisis since the referendum vote.

But her approach to the Brexit endgame, refusing to accept MPs’ trenchant opposition to her deal before belatedly opening ultimately futile negotiations with Labour, has left May politically abandoned.

By twice delaying Britain’s exit from the European Union and dangling the carrot of a second referendum if opposition MPs voted for her deal, she prompted anger and frustration among Brexit supporters and ridicule from Remainers.

In a forlorn bid in March to appease the most ardent eurosceptic MPs in her party, May offered to resign if they finally approved her deal. But several dozen rebelled anyway, consigning it to a third defeat in parliament and leaving her mortally weakened.

She was then forced by her party to agree to set out a timetable for her departure, but asked for time to give lawmakers a fourth chance to vote on the agreement in early June.

However, her own MPs’ patience ran out. Unimpressed by changes to the deal and with potential new leaders already jostling for position, they have ensured her time in Downing Street is coming to an end in near total humiliation.

“She has failed,” said Simon Usherwood, from the University of Surrey’s politics department. “There’s very little to commend her.

“She doesn’t really have a legacy,” he said.

The daughter of a Church of England vicar, May was born on October 1, 1956 in Eastbourne – a seaside town in southern England where her father was a chaplain at the local hospital.

She has described herself in interviews as a “goody two shoes” whose Protestant faith defined her upbringing.

She listened to cricket matches on the radio with her father and knew that she wanted to become a politician when she was just 12.

May studied geography and met her husband Philip at Oxford university before joining the Bank of England.

The two never had children and May devoted herself to a life of public service that saw her become Conservative Party chairwoman in 2002.

May made her first splash by telling her Tories at an annual conference to stop being “the nasty party” if they wanted to unseat then-popular Labour leader Tony Blair.

But a 2010-16 stint as home secretary saw May adopt isolationist rhetoric that included a vow to create “a really hostile environment for illegal migration”.

She took office in the aftermath of the 2016 Brexit referendum which swept away her predecessor David Cameron.

Despite having campaigned to stay in the EU, May embraced the cause with the mantra “Brexit means Brexit”.

Her promise to leave the EU’s institutions and end free movement of workers delighted eurosceptic MPs, but caused dismay among many pro-Europeans.

The splits in her Conservative party became a serious problem after a disastrous snap election in June 2017, when she lost her parliamentary majority.

May was forced to strike a deal with Northern Ireland’s pro-Brexit Democratic Unionist Party (DUP), and since then has struggled to keep her party and its allies together.

Naturally reserved and reliant on her husband and a few close aides, she often says she is just quietly “getting on with the job”.

But in the last election, the leader struggled to engage with voters and was dubbed the “Maybot” after churning out the same answers and speeches over and over again.

May has been written off before, with columnist Matthew Parris – a former Conservative MP – calling her the “zombie prime minister” for her ability to stagger on despite multiple attacks.

She has survived the resignations of a string of high-profile Brexit supporters, notably former foreign secretary Boris Johnson, and has endured constant sniping from MPs on the sidelines.

She won a leadership challenge within her own Conservatives in December, a victory that made her immune from a similar challenge for a year.

But ultimately her closed style of leadership and Brexit gridlock in parliament doomed her premiership.

“It’s hard to think of a Tory politician who would have been the perfect PM (prime minister) in such circumstances,” Tim Bale, politics professor at Queen Mary University of London told AFP.

“But it’s just as hard to think of anyone who would have been much worse than her.”