‘Those committing crimes against Zimbabwean citizens should be prosecuted’

Zimbabwe’s government has been urged to investigate crimes committed against the civilian population by the police, armed forces and some Zanu-PF members since January 14.

Source: ‘Those committing crimes against Zimbabwean citizens should be prosecuted’ – Times Live 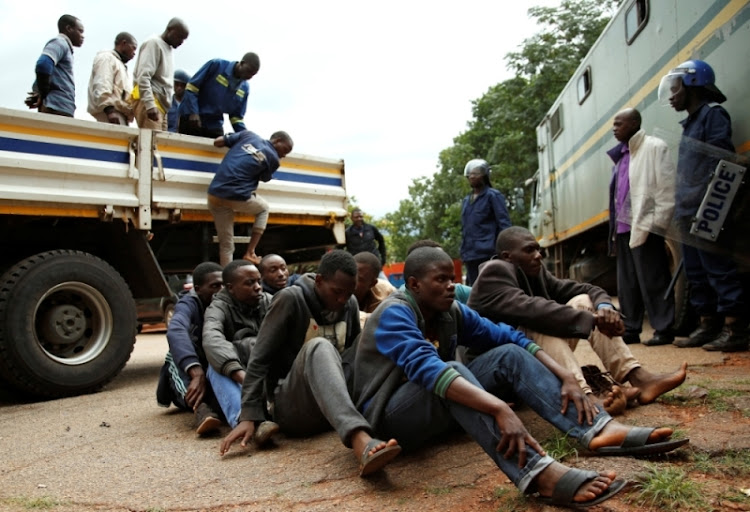 People arrested during protests wait to appear in the magistrates court in Harare, Zimbabwe, on January 16 2019. The Southern Africa Litigation Centre has called on the Zimbabwean government to take action against the police, security forces and Zanu-PF officials who have committed crimes against civilians.  Image: REUTERS/Philimon Bulawayo

Zimbabwe’s government has been urged to investigate crimes committed against the civilian population by the police, armed forces and some Zanu-PF members since January 14.

The Southern Africa Litigation Centre (SALC) said those found responsible for crimes such as torture, murder, and crimes against humanity must be prosecuted.

“Should the government of Zimbabwe fail to investigate and prosecute suspected offenders, SALC will not stand by, but take steps towards holding those responsible for the commission of the crimes accountable,” the centre said in a statement on Friday.

The centre said it was concerned about reports of serious human rights violations and the commission of atrocities following country-wide protests against the hiking of fuel prices.

It said the government’s response towards the protests had been systematic, widespread and disproportionately brutal.

The centre said it had received credible reports that the police and security forces had used live ammunition against its own citizens.

“There are credible reports that doctors have treated 78 confirmed cases of gunshot wounds.

“There are also confirmed reports that the police and government security forces continue to use lethal force against citizens in various Harare neighbourhoods, including Mbare, Glenview, Kuwadzana, and Chitungwiza.”

The centre said there was strong evidence suggesting that torture, extrajudicial killings intimidation, raids on homes for suspected leaders of the protesters, indiscriminate traffic stops, displacement and arbitrary detentions were taking place on a daily basis in the country.

It said there were also reports suggesting that wounded victims were being detained while they were in hospitals and taken to custody.

Those who had been indiscriminately detained were also being denied access to legal representation by the authorities.

The centre said Zimbabwe had an international obligation to investigate and prosecute the crimes committed by the police, security forces and Zanu-PF officials against its citizens.

“Should Zimbabwe take no steps towards fulfilling its obligation, the international community has an obligation to intervene in order to hold those responsible for the commission of the crimes accountable.”

The centre said that as a regional body struggling to hold governments accountable for the commission of international crimes, including acts of torture and crimes against humanity, it would take steps towards holding those individuals who were committing the crimes in Zimbabwe accountable.