Meanwhile, 27 members of Zimbabwe’s main opposition MDC are due back in court on Monday. 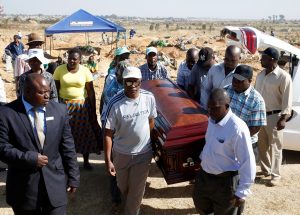 Mourners carry a casket with the remains of Sylvia Maphosa, one of the victims who died during clashes between security forces and opposition protesters on Wednesday in Harare, Zimbabwe, August 4, 2018. REUTERS/Philimon Bulawayo

HARARE – Three of the victims who died in Zimbabwe’s post-election violence have been buried.

The body of 53-year-old mother of two, Sylvia Maphosa, was laid to rest.

Hundreds of friends and family gathered to pay their last respects.

Maphosa’s husband of 30-years told local media that she left her office and then found herself in the middle of clashes. He says she was shot in the back as she tried to flee.

At least six people died when armed forces fired on civilians in the capital on Wednesday.

MDC members due in court

Meanwhile, 27 members of Zimbabwe’s main opposition MDC are due back in court on Monday.

The group was arrested at the party’s headquarters, just a day after six people were killed in post-election protests following a military crackdown.

They appeared in a Harare court on Saturday, where they were remanded in custody.

The group faces charges of public violence and if found guilty, they could be slapped with a 10-year jail term.

Prosecutors say the accused have been positively identified by police and that witnesses will testify against them.

Their lawyers, however, say the MDC members are innocent.