Time for a holistic approach to Gukurahundi

Source: Time for a holistic approach to Gukurahundi – The Standard April 28, 2019 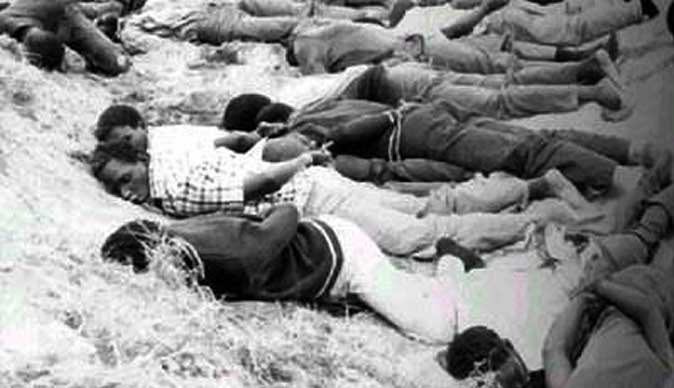 In social and other media there has been debate and speculation on where President Emmerson Mnangagwa is headed regarding resolution of the Gukurahundi issue.

In the run-up to Zimbabwe’s Independence Day (April 18, 2019) and on the actual day, the president made reference to long-standing injustices inflicted on innocent people in Matabeleland and Midlands provinces in the form of the Gukurahundi military campaign. This focus on the killings by the Fifth Brigade has been accompanied by implied commitments to redressing the development deficit that evolved side by side with political repression and economic deprivation of the region.

Naturally, some eyebrows have been raised by the fact that the latest consolidated presentation of the issues addressed by the president followed an initiative by a wide spectrum of civil society organisations (CSOs) based in the three provinces of Matabeleland South and North and Bulawayo. The 70 organisations in this Matabeleland Collective, to give it its proper name, called for and got an audience with the president and met him at State House, Bulawayo, in an engagement of over 120 CSOs, church bodies, faith-based and community-based organisations.

Before we go into the selective response of the president to the fundamental problems and issues that face the country and Matabeleland in particular, the Zimbabwe African People’s Union (Zapu) wishes to put on record that we applaud the organisations that held the beast by its horns in a non-sectarian manner.

The gaps that are left by the government and its institutions are not within their control and in the case of many of them, their core business is not to bring about comprehensive political and economic change in the country. That is why, therefore, their intervention’s stated purpose “to influence national and regional policy in support of participative democracy, healing, peace and reconciliation, economic renewal, social inclusion and equality and devolution based on compensatory development” is a remarkable mandate given to its leadership for a collective presentation to the president on March 21, 2019.

Furthermore, individuals or CSOs are within their rights to express their views, opinions or blueprints on issues facing the nation and individual regions.

Indeed, political parties in and outside Parliament are better served by this public participation than by compliant and subservient citizens afraid of raising their voices on critical issues impinging on their mandates and the quality of life of their members, clients and partners. We unreservedly support this line, not necessarily implying that the position taken by the Matabeleland Collective satisfies our stance as a party on Gukurahundi’s ideological sources and eventual legal and political resolution.

There is no doubt that the engagement with the Matabeleland collective and the wide agenda contained in its compendium gave president Mnangagwa an opportunity to choreograph his government’s plans to present a picture of more benevolent rule in Matabeleland than what transpired under former president Robert Mugabe.

In spite of key players like himself presiding over the security sector in both the former and current permutations of Zanu PF, he managed to sound more benign and capable of listening and acting positively. Thus he has committed his administration to solving the plight of people who could not get birth certificates and identity documents because their parents were killed over three decades ago during Gukurahundi.

He also confronted the question of whether victims of Gukurahundi could exhume and rebury relatives lying in shallow graves, again reacting positively.

Similarly, the President seemed open to dealing with the issue of facilitating access to documentation like death certificates that would clearly indicate the cause of death of victims.

This would be essential in the event of compensation and closure. For the court of public opinion he assured everyone they would not be risking arrest and prosecution if they discuss Gukurahundi, their experiences and demands. This is in spite of the fact that constitutional reforms due under the 2013 constitution are still outstanding.

Of course, the real proof of the pudding will be in the eating, because pronouncements of an individual may change down the line of authority when it comes to implementation.

It would have been more reassuring if this was accompanied by a legal instrument.

When coupled with implementation of devolution of power to the provinces, control over natural resources-based development projects can uplift livelihoods over large areas.

The problem is that the carrot of devolution that has been dangled is more like the usual decentralisation of authority coming with strings manipulated from Harare.

Unless the manoeuvres are resisted, we may have appointed governors instead of provincial assemblies of elected parliamentarians making decisions. The newly-found enthusiasm for devolution on the part of the ruling party and its government may be a route to more of the same centre-periphery relationship under a new name.

Zimbabwe’s provinces deserve more entrenched and accountable structures with real authority over resources and priorities in their areas.

The president’s reported acceptance of making up the development deficit arising from Gukurahundi and resulting insecurity in Matabeleland also points to a seeming thaw in the repressive iceberg.

Schools, clinics, and other essential infrastructure could get a long-overdue boost. This would be a medium-term change in service availability and employment creation, with the potential to reducing the flight of young people to neighbouring countries if locals get priority even in government institutions.

Thus far the tone of this statement has been to acknowledge positive elements in the president’s grudging and guarded commitments to redressing three decades of marginalisation of Matabeleland.

These commitments and concessions fall far short of a comprehensive accounting for Gukurahundi, starting with why the atrocities happened so soon after independence and defined a whole region’s exclusion from the much-deserved benefits of the liberation struggle. More importantly, perpetrators have yet to be brought to book and some have died and were even declared national heroes.

Thirdly, reports by government commissions of inquiry have gathered dust without any attempt to make them the starting point for determining culpability and redress for the killing of over 20 000 people, including a mere apology to direct victims and traumatised citizens.

Some even see mention of Gukurahundi as divisive and playing of a “tribal” card, whereas ethnic/tribal, cultural and racial discrimination have not received due attention from “progressive” people in national politics.

Civic organisations and churches have had to ask for assurance that killings with ethnic overtones can safely be mentioned and redress publicly sought. This is a far cry from what we sought as a replacement to colonial repression and perpetual violation of our people’s rights across the land.

The president and government institutions must ensure that they follow the commitments made to the Matabeleland Collective, providing unfettered support to victims of the killings and affected communities, which is practically the whole of Matabeleland and Ndebele-speaking parts of Midlands.

At the same time this programme must not be a ploy for papering over the comprehensive accounting and resolution for Gukurahundi.