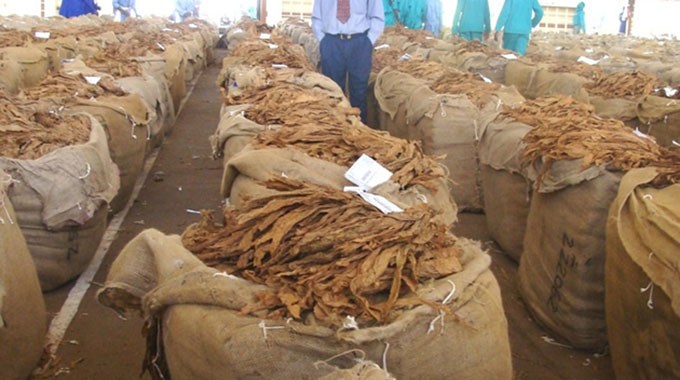 Elita Chikwati Senior Agriculture Reporter
Tobacco deliveries to the auction floors have increased as most farmers have finished processing their crop for sale.
Some farmers are also delivering their crop because they want to raise school fees for their children ahead of the opening of schools in the coming weeks.

Boka Tobacco Floors operations manager Mr Moses Bias confirmed that deliveries to the auction floors had firmed. He said this was a normal trend as schools open.

“Our volume have picked. Many farmers are now delivering their crop because they have finished curing and grading, but the major reason for the increase is that farmers now want money for school fees.

He said the season was going on well and there have not been any challenges with prices.
“The only challenge we are still encountering is that of farmers who do not comply with the requirements of the Tobacco Industry and Marketing Board (TIMB) to renew their grower numbers and book before delivering their crop.

“We have so many bales in the receiving area that cannot be sold because the farmers have no complied with the TIMB requirements.

“This is usually done by farmers who come to the floors for the first time. The farmers end up staying at the floors for days while waiting to sell their crop,” he said.

Most farmers said they were happy with the price being offered by buyers. So far the highest price at the floors has remained on $4,99 per kilogramme while prices at the contract floors have gone beyond$5 per kilogramme.

Farmers told The Herald that they were happy with the seasons, but complained of insurance companies that were deducting money from their accounts without their consent.

Meanwhile, farmers have sold 45 million kilogrammes of flue cured tobacco worth $125 million at an average price of $2,79 per kg.