Mutasa appeals against auctioning of property 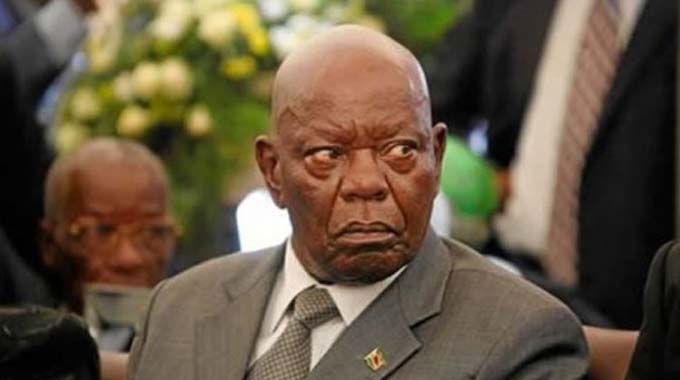 Source: Mutasa appeals against auctioning of property | The Herald April 26, 2018

Zimbabwe People First (ZPF)top official Mr Didymus Mutasa has approached the Supreme Court to save his property from being auctioned over $26 900 he owes a Harare law firm. Mr Mutasa had his property attached over unpaid legal fees he owes Nyakutombwa Mugabe Legal Counsel and was taken to LM Auctions in Harare.

The fees accrued when the politician engaged the lawyers to fight his legal battles against zanu-pf in 2015.
Mr Mutasa and his wife Getrude filed an application for rescission of the High Court judgment that resulted in the property being attached, arguing that the property belonged to Mrs Mutasa.

He also argued that the lawyers did not properly serve him with the court papers and that the judgment must be rescinded.
Justice Amy Tsanga last week threw out the rescission application, allowing the Sheriff to sell the attached property.

The judge ruled that Mrs Mutasa had no legal interest in the matter and that Mr Mutasa had been properly served with the relevant papers.
LM Auctions yesterday advertised the sale of the property this Saturday.

However, Mr and Mrs Mutasa, through their lawyers Mwonzora & Associates, filed a notice of appeal at the Supreme Court.
In the notice of appeal, Mr Mutasa argue that the judge erred in various respects.

“The learned judge erred in finding that the first appellant had no legal interest in the matter when such were even canvassed in her judgment. In that regard, it was wrong in fact and law for the learned judge to hold as she did that the provisions of Rule 449 did not apply.

Mr Mutasa was expelled from zanu-pf together with Messrs Rugare Gumbo and Temba Mliswa for allegedly trying to topple President Mugabe.

The trio engaged the services of Nyakutombwa Mugabe Legal Counsel to fight the expulsion.
They also sought to nullify the amendment made to the revolutionary party’s constitution at the 2014 people’s congress.
After filing several applications, the trio later chickened out and dropped the challenge.

In coming up with the bill, the law firm charged the trio for all opted services rendered and for all court attendances in terms of the Law Society of Zimbabwe General Tariff of 2011.