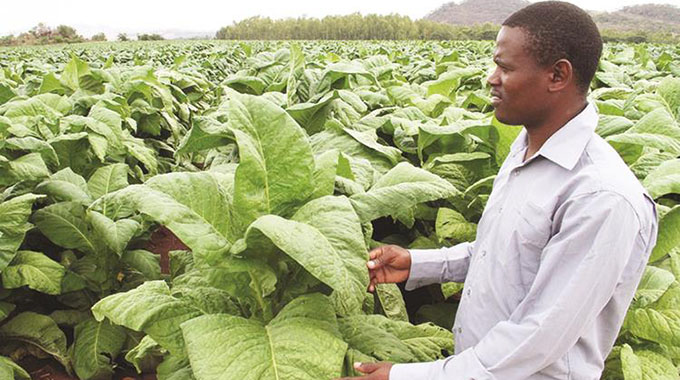 Mary Muradzikwa  Herald Reporter
Tobacco farmers have so far put about 7 000 hectares under the crop, which is a decline of almost 50 percent from the area put under the crop during the same period last year.

According to the latest Tobacco Industry and Marketing Board (TIMB) weekly statistics, farmers put 6 572 hectares under the golden leaf this season compared to 11 945 hectares during the same period last year.

The TIMB said that farmers had not yet planted the dryland crop this year, which was the same situation this time last year.

The bulk of the crop was produced under irrigation as most farmers had acquired irrigation facilities. Mashonaland Central had the largest area put under tobacco at 2 612 hectares, followed by Mashonaland West with 1 878 hectares, Mashonaland East had 1 206 hectares and Manicaland had the lowest hectares of 876.

Zimbabwe Commercial Farmers’ Union (ZCFU) president Mr Wonder Chabikwa said the decline in tobacco hectarage was due to farmers being wary of the climatic conditions this season, with rainfall forecast pointing to an El Nino phase.

“Tobacco hectarage this year is lower than that of last year due to farmers being cautious about the quality of the rainy season.

“They may decide to increase the hectarage after the first rains,” he said.