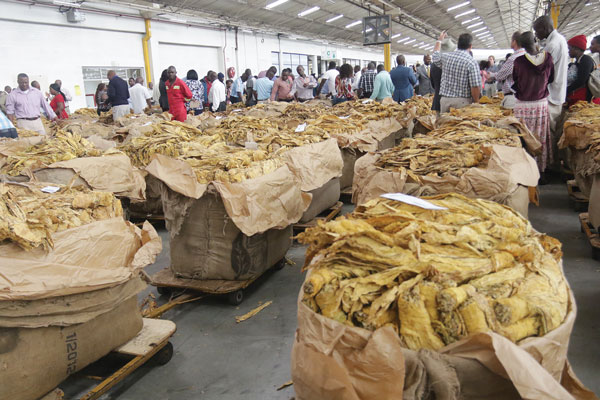 FIDELITY MHLANGA
GOVERNMENT was by this week yet to release the US$60 million earmarked for ramping up tobacco production, even as preparations swung a gear up on the onset of the first rains, businessdigest can report.

Tobacco is among the few crops and minerals that have been thrust at the centre of economic recovery efforts.

Government has announced several policies and incentives that are meant to build capacity in the selected crops and minerals, under its Vision 2030 agenda.

In an interview with businessdigest, Tobacco Industry and Marketing Board (TIMB) spokesperson Chelesani Moyo said over 113 000 farmers had signed up to grow the golden leaf this season.

She confirmed that funding was yet to be released.

“The tobacco season has already begun and TIMB registered 113 477 tobacco growers as of 11 November 2021,” Moyo said.

“As per the Ministry of Lands, Agriculture, Fisheries Water, and Rural Development’s state of preparedness for the 2021/2022 summer cropping season, the target is to produce a total of 250 million kg of tobacco. The US$60 million Tobacco Production Localisation Revolving Fund has not been disbursed yet but plans are at an advanced stage. To standardise the inputs to be distributed, TIMB is procuring all physical inputs and has finalised evaluating tenders for the supply of the inputs.

However, leaders of farmers’ unions warned that delays in releasing funding would have consequences on the sector.

Farming operations across all crops have perennially been held back by delayed release of funding from the government.

The Tobacco Value Chain Transformation Strategy, which was announced by the government early this year, was expected to localise funding for the sector and increase value addition.

There has been concern that funding being injected into the sector by foreign contractors has placed farmers at a huge disadvantage.

Most of the revenues generated out of contracted tobacco are held by the contracting firms.

Zimbabwe’s plan is to transform the tobacco sector into a US$5 billion industry by 2025.

Government says localisation of funding is expected to play a key role in addressing the funding challenges confronting farmers.

Beneficiation will include processing tobacco into cigarettes for the export markets.

Only 2% of tobacco produced in Zimbabwe is currently being processed locally.

This figure has been a source of worry for authorities, who have been pushing for value addition.

Tobacco farmers are targeting to produce 250 million kg this year.

But delays in releasing funding could be one of the setbacks that could affect the production.

Once available, the US$60 million would be accessed by individual growers and contractors for lending to contracted growers.

It would also be accessed by auction tobacco floors for funding growers.

Beneficiaries of the fund would also access working capital directly from participating banks.

The Victoria Falls Stock Exchange has also partnered with TIMB to raise funds for local merchants in a deal envisaged to end small-scale farmers’ misery.

In 2004, when contract floors came into play, auction floors enjoyed a huge market share of 76,8 %. This figure has declined to 5%.

Farmer Talk Club chairperson Phineas Mukomberanwa said most farmers who were earmarked to benefit from the US$60 million through the tobacco input credit scheme programme conducted by TIMB have been affected. He said such farmers were now trying to secure alternative contracts.

“Most of them might fail to go back to the fields this season or they will produce from their little resources. The few merchants who control the production of the crop will continue and as Zimbabwe, we will not benefit fully from our tobacco if we maintain the status quo. Lastly, the auction system that was meant to be revamped will not be and pricing discovery will be affected,” he said.