The first spilling of Tugwi-Mukosi Dam in southern Masvingo is a boon for irrigation, as water impounded in the lake can supply the Lowveld greenbelt for three years without replenishment.

Tugwi-Mukosi, commissioned in May 2017, spilled for the first time on Saturday night, marking a milestone in food security through irrigation development. The water body has never filled since its commissioning in May 2017.

However, the spilling in a good rainy season means that the combined flows of the upper Tugwi and Mukosi rivers can now flow unimpeded down Tugwi River from the spillway, and flow into Runde River, already running at flood levels.

This puts the downstream communities back to where they were in good seasons before the dam was built. While warnings not to try and cross the fast flowing rivers have been stressed, additional attention is being paid to a few hundred families that might see flooded villages. 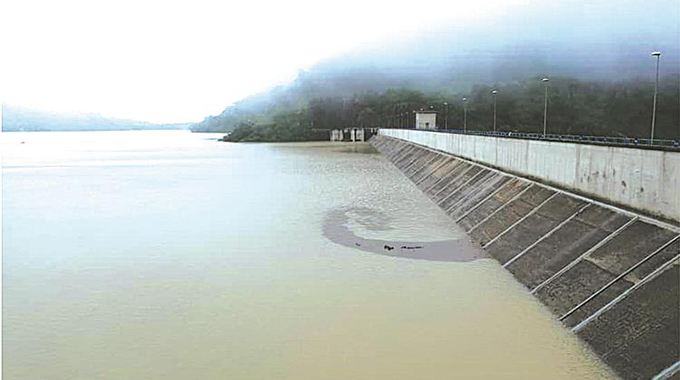 Government and its development partners have been preparing for the Tugwi and Runde rivers to rise even higher, with reports that at least 250 families in southern Chivi, Mwenezi and Chiredzi, downstream of the confluence of Runde and Tugwi rivers might be severely affected.

Camps to provide temporary shelter for families were set up at Chingwizi Camp and Chilonga Secondary School.

Tugwi-Mukosi was initially billed to irrigate 25 000 hectares, but advances in irrigation technology saw the figure being ramped up to more than 40 000ha.

ZINWA spokesperson Mrs Marjorie Munyonga said the river banks were holding the good flows and that the dam was secure.

“(There are) no threats (of flooding in downstream areas) so far, but we are alerting communities downstream as they may experience increased flows of water in the rivers,” she said.

“So, we have put them on high alert and urge them to desist from crossing flooded rivers and carry any other activities near the rivers.”

“The spilling of Tugwi-Mukosi has greatly enhanced water security for irrigation in the Lowveld,” said Mrs Munyonga.

“The dam has been a game-changer since its first season of operation when it reached 72,4 percent full. Tugwi-Mukosi has lessened the burden of water provision to the Lowveld on Lake Mutirikwi which has been failing to fill up (with its last spilling in 2008).”

Lake Mutirikwi was currently only less than 60 percent full despite the current rains and was unlikely to fill this year.

“The current annual irrigation water demand for the Lowveld is 500 000 megalitres, which means with the usable volume of water in Tugwi-Mukosi right now, it can supply the Lowveld for three seasons without additional replenishment,” said Mrs Munyonga. She said Tugwi-Mukosi was now a buffer against perennial flooding in Tugwi River.

Tugwi, which means a flooded river, has been synonymous with floods since time immemorial.

“The development of the Tugwi-Mukosi Dam has helped in lowering chances of flooding downstream by capturing excess water which should have caused flooding this season,” said Mrs Munyonga.

“In fact, any flooding downstream has already been delayed. Development of the dam now means flood flows are captured and can be managed through controlled releases, thereby reducing the flooding effect downstream.”

The ongoing spilling also provided an opportunity to test the dam’s resilience.

“The spilling is also historic in that it has tested and confirmed the design capacity of the spillway and the dam structure,” said Mrs Munyonga.

“We are now able to test and confirm that the dam design is able to withstand its full capacity.”

Every dam needs to be tested before, during and after construction and Saturday’s historic spilling of Tugwi-Mukosi Dam had completed the cycle. Mrs Munyonga dismissed reports that at full capacity, Tugwi-Mukosi Dam was now threatening to obliterate the Masvingo-Beitbridge Highway.

She said the reports were false as “the saddle dams are intact.”

Mwenezi West legislator Cde Priscilla Moyo said families in some parts of Mwenezi downstream of Runde and Tugwi rivers were under threat.

“Some of the families have been moving to higher ground fearing for the worst if the dam spills and there is also a risk of loss of crops to those settled near rivers and we have been urging them to remain on high alert,” said Cde Moyo.

Tugwi-Mukosi Dam is located at the confluence of Tugwi and Mukosi rivers along the border between Chivi and Masvingo districts.

Newer Post
Progression or Regression? The New Constitution and the State of the Judiciary in Zimbabwe
Older Post
Zim joins India, SA in trade waiver efforts