Tuku a hero indeed, so is Morgan Tsvangirai

Source: Tuku a hero indeed, so is Morgan Tsvangirai – The Zimbabwean 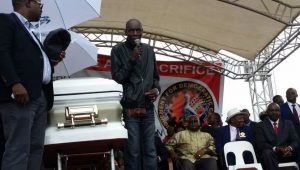 This time round, Zanu PF would have wanted to spruce up its buttered image following the mayhem of the last couple of weeks, but let them be warned that that is not going to work.