Source: Tuku dies fighting in the corner of the poor – takes a dig on those who kill and rob the poor – The Zimbabwean 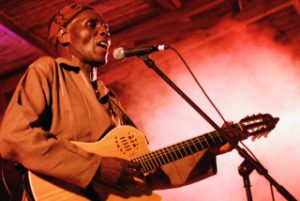 The late Dr. Oliver Mtukudzi fought in the corner of the poor even on his deathbed. In a song he recently recorded that has not yet been released, which has been well received on social media, Tuku bemoans the practice where those who kill and rob the poor are allowed a free reign “Vanouraya varombo, havatongwe sei? Vanotorera varombo, havatongwe sei? Vanobhinya varombo, havatongwe sei?”, Tuku bellows in a voice that portrayed him as not well and seriously troubled by the happenings in the country.
It would appear in this song Tuku sang for the poor who have been robbed by the government through the illegally enforced 2 percent tax on electronic money transfers, the vendors who have their wares confiscated by the police and many others who are struggling to met ends meet who are frustrated by the system, yet the corrupt perpetrators are not brought to account.
Well done Dr. Tuku. May your Soul Rest in Eternal Peace, and may your message continue to speak against the oppression of the poor.