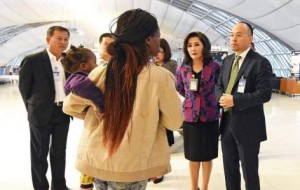 Thai airport officials talk Wednesday to members of a Zimbabwean family that have been living for three months at Suvarnabhumi International Airport on the outskirts of Bangkok. Photo by EPA-EFE/STR

BANGKOK – The United Nations said it is working to assist a Zimbabwean family of eight who have been living in a Bangkok airport for months because they fear persecution in their home country.

The family, which includes four children under the age of 11, traveled to Thailand in May for a visit, but are refusing to return to Zimbabwe now that their visas are expired. They requested refugee status in Thailand, but the country doesn’t offer legal status for asylum seekers.

The U.N. High Commissioner for Refugees said Thursday it plans to provide assistance to the family, which has been living in Suvarnabhumi International Airport for nearly three months.

“The UNHCR has received the case and is working on providing a solution for them,” Panupat Danpanich, assistant liaison officer at UNHCR Thailand, told The Bangkok Post.

After visiting Thailand as tourists, the family attempted to fly out of the airport in October to Barcelona, Spain, by way of Kiev, Ukraine. Airport officials denied them boarding, though, because they didn’t have visas for Spain, Thailand’s immigration bureau spokesman, Col. Cherngron Rimphadee told BBC News.

They tried again to leave Thailand on a flight through Kiev to Dubai, United Arab Emirates, with plans to travel to another country. But they canceled the last leg of their trip, so they were sent back from Dubai to Bangkok. They have been living in the airport since.

The family said they feared returning to Zimbabwe, which saw a military coup overthrow former President Robert Mugabe in November. Some described the overthrow as a “bloodless coup.”

Panupat said sending the family back to Zimbabwe, where the situation is considered “unsettling” by the United Nations, was not an option.