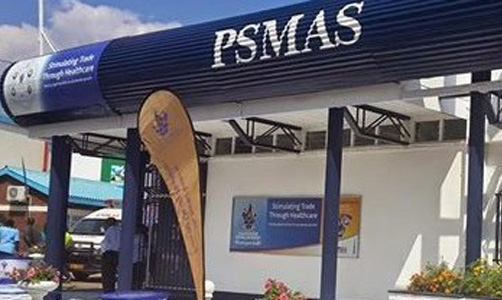 THE Premier Service Medical Aid Society (PSMAS) said it faced imminent collapse as it could no longer sustain its operations with the measly monthly subscriptions paid by members, the majority of them civil servants.

PSMAS chief executive officer Farai Muchena and managing director Tendai Kapumha recently appeared before the Ruth Labode-led Parliamentary Portfolio Committee on Health where they disclosed that its members were now forced to make co-payments each time they visit a general practitioner since an average general practitioner charges $1 822 consultation (US$28) fee.

PSMAS subscriptions are currently at $67 for the main plan, $135 for premier plan and $181 for the prestige plan.

With 91% of their membership being civil servants who earn less than the consultation fees required in local currency, PSMAS executives said they were lobbying government to allow them to increase the subscription fees.

Its competitors like Cimas and First Mutual Medical Aid Society charge between $1 365 and $$12 699 for similar services.

PSMAS takes care of 7% of Zimbabweans on medical aid (954 000 subscribers) in a country where 87% have no medical insurance and 6% or less is covered by the rest of other medical aid societies. It takes care of 4,8 million patients annually.

“Medical inflation is the biggest threat that we face because we import a lot of drugs for millions of our membership and yet our membership continues to pay subscriptions in Zimdollar,” Kapumha said.

“We now have less revenue than claims; for example, in 2020 we collected $346 million revenue and the claims were $362 million and this affects viability of the fund which has over the years had to eat into its reserves to provide services.

“We last got an increase of subscriptions five years ago in 2013 and up to 2019 we were eating into our reserves to provide for our members. During the US$ era we used to get US$37 subscriptions from our members, but now it is around US$0,58 cents at official rate,” he said.

Kapumha said the cost of blood used to be US$120 and now PSMAS was being asked to pay $12 000 for a pint which is beyond the reach of many.

“We have patients who depend on dialysis and one has to fork out $10 000 per session and it needs a minimum of three sessions per week or else they die and that person that we are trying to cover for dialysis is contributing only $67 per month. Anyone of us could fall into that category at some stage,” he said.

Muchena said the impact of the uneconomic subscriptions were that patients suffered severe shortfalls and co-payments as well as challenges for PSMAS to meet foreign obligations for patients who require services that are not available locally.

“We also have high operation costs because of the prices of energy and fuel. The drugs are expensive too. There is failure to replace equipment and it compromises the quality of care and business continuity and even retention of staff,” Muchena said.