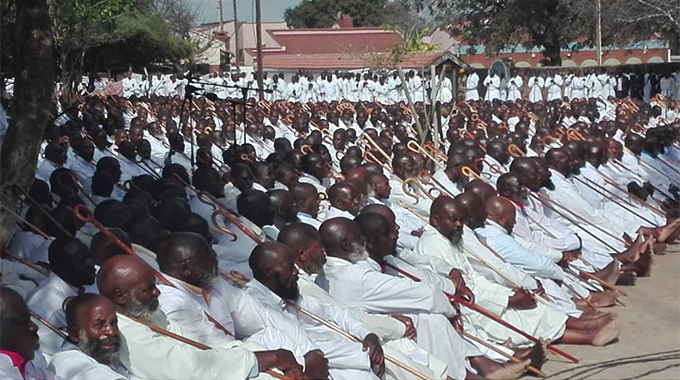 POLICE on Saturday dispersed more than 5 000 members of the Johane Marange Apostolic Church who had gathered on the outskirts of Masvingo for their annual Passover ceremony.

The worshippers were ordered to return to their homes after violating Covid-19 social distancing rules which do not allow a group exceeding 50 people to congregate.

Police led members of the provincial Covid-19 taskforce to engage the sect leaders and apprise them of the need to disperse in line with rules set by Government to curb the spread of the pandemic.

Covid-19 cases continue to spike in the country with most of them being imported by Zimbabweans coming from hotspots.

Johane Marange apostolic sect members removed from Maparanyanga, among them women and children, had to sleep by the roadside along the Masvingo-Mashava highway on Saturday night as they scrambled to access the limited transport back home.

When The Herald visited the site yesterday, scores of families were still by the roadside where they had pitched up tents for temporary shelter.

The visibly agitated church members said they were unhappy at being ordered to disperse by the police before they could have their annual Passover feast.

Cooking utensils, blankets among other items were strewn all over the place with some seated around fires while others were cooking.

They refused to have photographs taken, complaining over the way they had been blocked from celebrating Passover.

“We have our own transport which is on its way. What do you want here? Don’t take our pictures otherwise it won’t end well here. It could be better if Government had allowed us to remain at our shrine and now that you chased us away, we are like animals,” said one male sect member, threatening to harm this reporter.

Their leader, Mr Karifinosi Mashanda, could not be reached for comment yesterday.

However, on Saturday, he appealed to the provincial Covid-19 taskforce team to allow them to have Holy Communion before dispersing.

“While we are not against what the authorities want us to do, we are just requesting to have our Holy Communion as per the tradition of our church then we can go back home,” said Mr Mashanda.

The taskforce declined the request saying it would be illegal for them to do so since a gathering of more than 50 people was outlawed under Covid-19 control regulations.

Taskforce spokesperson Mr Rodgers Irimai yesterday praised the sect members for being co-operative as some immediately left after being advised that the gathering was illegal.

“We had fruitful discussions with the sect leaders on Saturday morning and members immediately started dispersing after we told them that a gathering of more than 50 was unlawful.

“They were very cooperative although they wanted to be allowed to have their Holy Communion, which is cause was not possible.”

Mr Irimai allayed fears the sect members would be stranded by the roadside.

“We are not going to assist them with transport because they told us they had made prior transport arrangements before coming for their Passover,”he said.

The taskforce expected all the sect members to have returned to their homes by today, the day when the majority had pre-booked transport back home.