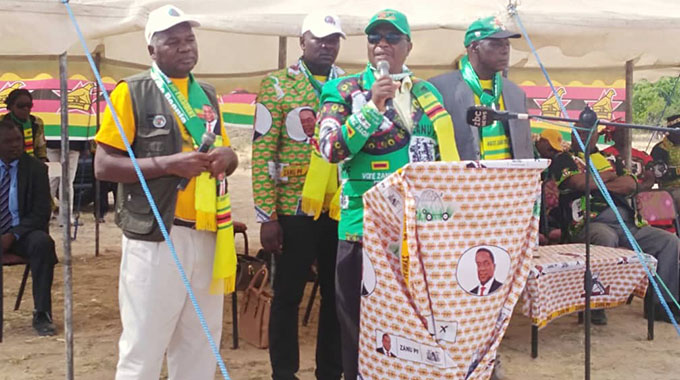 Bulawayo Bureau
VICE President Constantino Chiwenga yesterday said Government has plans to ensure that unemployed teachers and nurses in the country end up getting jobs. Speaking during a well attended Zanu-PF rally at Nkayi Business Centre in Matabeleland North Province, VP Chiwenga said Government was committed to addressing the shortage of teachers at schools in the country.

“In Mat North, there are 1 000 qualified teachers who are not employed,” he said. “We need to address that challenge by recruiting those teachers, including trained nurses who are not em- ployed.”

VP Chiwenga said Government was also aware of poor roads in Nkayi, saying roads such as Nkayi-Bulawayo and Kwekwe-Nkayi-Lupane, including bridges, would be repaired.

“We will also ensure that Nkayi District Hospital is equipped and address accommodation problems faced by doctors and nurses,” he said. “We will construct decent houses for the hospital staff, as well as ensuring that the mortuary is working.
“We also want to reduce maternal deaths resulting from mothers delivering at their homes. We have scrapped maternity fees and children under the age of five don’t have to pay medical fees.”

VP Chiwenga said there was a water shortage in Nkayi district which should be addressed.
“We expect the Gwayi Shangani Dam to be completed by 2019 and this will alleviate water shortages in the province as well as create a greenbelt for Nkayi,” said VP Chiwenga.

“We want to fund local pharmaceutical companies so that they manufacture essential drugs for our hospitals rather than solely relying on foreign firms. We hope this will address the problem of drug shortages in our hospitals.”

Meanwhile, VP Chiwenga has called on the people of Binga to rally behind President Emmerson Mnangagwa and candidates from the ruling Zanu-PF to end years of suffering in the area.

Addressing a Zanu-PF rally at Manjolo Business Centre in Binga, VP Chiwenga said the new administration under President Mnangagwa had a development programme for all areas in the country, including Binga.

“I am here representing our party’s First Secretary and President Emmerson Mnangagwa who will visit this place soon,” he said. “The local chiefs, Zanu-PF leadership and the Provincial Affairs Minister, Cde Mathema, have told me of the problems you are facing here in Binga.