English Situation Report on Zimbabwe about Contributions, Coordination, Epidemic, Flood and more; published on 16 May 2022 by UNICEF 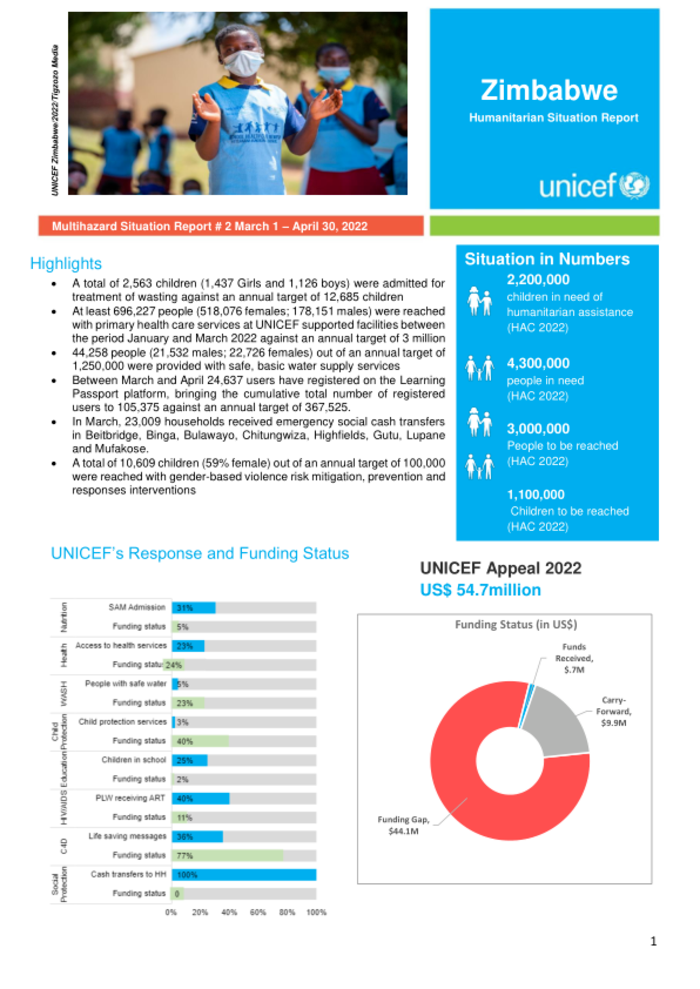 Between March and April, UNICEF continued to lead sectoral coordination in UNCEF- led sectors. The deteriorating economic situation, against a backdrop of increasing inflation and prices of food and basic commodities is impacting on food availability and nutrition outcomes as noted by the operational research conducted by Zvitambo and Paedriatic Association of Zimbabwe which indicated that one in six of children discharged from the Nutrition Treatment Programme relapse and have to be re-admitted for treatment mainly because they are discharged into the same socio-economic conditions they came from before admission. Following confirmation of an outbreak of Wild Polio Virus in Malawi, in February 2022, Zimbabwe has been identified as one of the countries that needs to participate in a regional response to prevent further spread of the polio virus. UNICEF continues to promote alternative learning platforms such as the learning passport which has reached 105,375 registered users to date. The ongoing emergency social cash transfer which has reached 23,009 households is contributing towards increasing the purchasing power of vulnerable households and access to basic services thus cushioning them against the debilitating impact of the current economic crisis. Community engagement activities aimed at increasing knowledge and awareness on the COVID 19 vaccination blitz campaign has reached 3,334,268 (against an annual target of 4.5 million people.