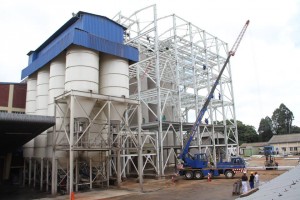 The Bakhresa Group, which recently invested over $21 million in Blue Ribbon Foods, said this week it was failing to service its foreign loans due to hard currency shortages.

“We have accumulated a foreign debt which we have not yet been able to remit. Our foreign wheat supplier has stopped deliveries and insists on being paid at least a minimum of US$3 million,” the group’s chief executive officer, Mounir Bakhresa, said.

Zimbabwe is struggling to pay for imports due to a shortage of United States dollars, a currency it adopted in 2009 after its own was wrecked by hyperinflation, that reached 500 billion percent.
Following the introduction of the surrogate “bond note” to ease the cash shortages in 2016, dollars have disappeared from banks and are now traded on the street and black market at a premium of up to 40 percent.

Government blames the shortages on lack of confidence in the financial system, a mismatch between cash dollars and bank balances, poor cash circulation and lack of discipline and rent-seeking behaviour.
Bakhresa said the Tanzanian firm was also finding it difficult to take delivery of equipment it procured from Turkey as companies in the European nation are demanding full payment before shipment.
The group, which has operations in Tanzania, Zanzibar, Uganda, Kenya, Malawi, Zambia and, most recently Mozambique, boasts over US$300 million in annual turnover.

He said the firm had failed to produce Sunlight dishwashing liquid for the past two weeks as it could not import raw materials from South Africa.

“The foreign currency shortages are a reality and what that means is that we are not able to run our factories 24 hours a day, seven days a week. As a result, there will be some gaps where you may not have all the materials to run the factory,” he said.

Unilever, one of the world’s largest food, home and personal care products producers, is currently operating below 50 percent capacity.

Reserve Bank of Zimbabwe governor John Mangudya, who last week introduced a $400 million nostro stabilisation facility, said the panacea to the problem of foreign currency was to increase production, exports, foreign direct investment, diaspora remittances, loans and protecting investors’ funds.
“The bank is enhancing the nostro stabilisation facilities by US$400 million to provide assurances that international remittances and individual foreign currency inflows received through normal banking channels are available for use when required by the owners,” he said as he presented the 2018 monetary policy statement in Harare.

The facility is also expected to meet the foreign exchange requirements for the importation of fuel, medications, electricity, cash imports and industrial raw materials for the manufacture of cooking oil, other food products, packaging and goods meant for export, among other things.