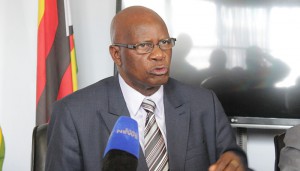 FINANCE Minister, Patrick Chinamasa, has called on State-owned entities to expedite setting up procurement units, which will be responsible for the acquisition of goods and services, in line with the new law.

Government last month repealed the Procurement Act and abolished the State Procurement Board (SPB), transferring public procurement to government ministries, parastatals and local authorities.
The Act was last reviewed in 1999 when the Tender Board was revamped to SPB.

In place of SPB, government set up a new body called the Procurement Regulatory Authority of Zimbabwe, (PRAZ) which will not be in charge of procurement. Instead, PRAZ will oversee and regulate procurement activities by government ministries, parastatals and local authorities.

Speaking at a procurement conference by Buy Zimbabwe in the capital last week, Chinamasa said: “To government entities, parastatals and local authorities, I say quickly set up procurement entities in line with the new procurement order. This will ensure efficiency in these entities.”

Instead of using the open tendering process where interested bidders can submit bids, there were many instances where officials handpicked candidates in the proposed projects, in a move that raised eyebrows.

They violated professional ethics by awarding tenders to companies that did not meet specifications.
Government is the single largest spender in the economy. In his 2018 National Budget statement, Chinamasa set aside $1,2 billion for capital expenditure. About 72 percent of this amount will be spent on local supplies, according to Chinamasa.

“This will create about $900 million to be consumed in the economy,” said Chinamasa.