Unity accord a dishonest pact: Nkomo’s son … says the pact died with his father and Mugabe

Source: Unity accord a dishonest pact: Nkomo’s son … says the pact died with his father and Mugabe – NewsDay Zimbabwe 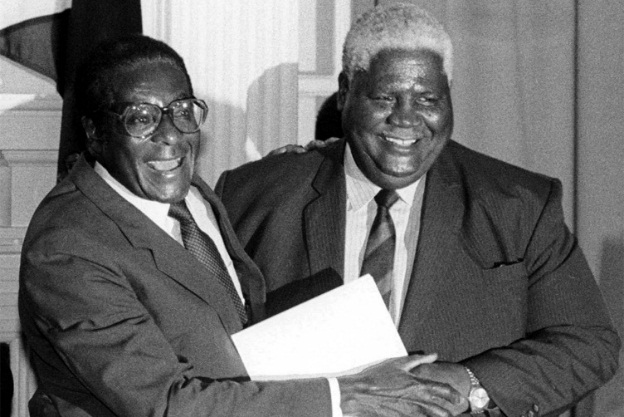 ASPIRING Zapu president Sibangilizwe Nkomo, son to the late Vice-President Joshua Nkomo, has described the unity accord which his father and the late former President Robert Mugabe signed to end hostilities in December 1987 as the most dishonest document in human history.

The unity accord was signed at the height of the Gukurahundi massacres in which Mugabe, then Prime Minister, orchestrated the mass killings of civilians in Matabeleland and Midlands regions.

Nkomo recently threw his hat into the ring to contest the Zapu presidency following the death of Dumiso Dabengwa in May 2019 who led the pullout of ex-Zapu members from the accord in 2008 citing Zanu PF insincerity.

The congress to select the new leadership is set to take place in October.

“The worst and very dishonest document ever put together in the human history of agreements and contracts was the 1987 Zimbabwe Unity Accord,” Nkomo said.

“Anyone who has taken sight of the document will tell you that it was either done or signed in a hurry or at gunpoint, as it were. It is a laughable document to say the least.

“For Joshua Nkomo, it stopped the killings, the rapes, the torture, the disappearances and suffering of innocent Zimbabweans.

“For Robert Mugabe, it massaged his ego to continue with his wild dream of a one-party State.

“We are also grateful for the cessation of bloodletting. I’m on record as saying these types of agreements are a ‘Members Only Club’ type of arrangements made in the name of the masses, they can never work effectively.”

He added: “Real unity must come from the people voluntarily and freely at grassroots level. The demise of both signatories to the accord in a way marked the end of the club agreement.

“The fact that Mugabe refused to be buried alongside with Nkomo at the National Heroes Acres sealed the demise of the accord.”

“We need to move into a better and more realistic space,” he said.

Following the signing of the unity accord in 1987, Zimbabwe has declared December 22 as a public holiday commemorated annually.