US$ 60M urgently required for relief response to Cyclone Idai 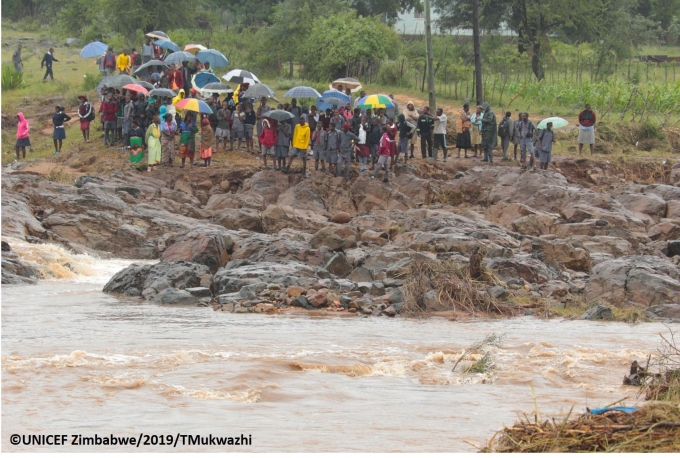 The launch of the revised humanitarian flash appeal convened by the UN Resident Coordinator was held at the UN offices in Harare bringing together senior representatives from Government, Ambassadors, members of the diplomatic corps and heads of development cooperation, UN heads of agencies, and non-government organisations.

Launching the revised humanitarian flash appeal, UN Resident Coordinator, Mr. Bishow Parajuli said, “The United Nations, in response to Government’s request, launched a Humanitarian Flash Appeal recently requesting for USD 234 million to address the emergency needs of 2.2 million people as a result of economic challenges and drought in urban and rural areas of the country. Cyclone Idai has left an additional 270,000 people extremely vulnerable, bringing the total number of people targeted for humanitarian assistance by the UN and humanitarian partners to 2.47 million people with USD 294 million resources required.”

Appreciating several contributions made including by the corporate, churches, schools and the public at large, Mr. Parajuli reiterated the commitment of the humanitarian community and called for an urgent response to the revised humanitarian flash appeal in order to meet various immediate needs, including food, water, shelter, health and nutrition, education, protection, and logistics as well as early recovery needs.

Noting the recent findings by the Zimbabwe Vulnerable Assessment Committee that over 5 million people will be food insecure in 2019, Permanent Secretary in the Office of the President and Cabinet Ms Constance Chigwamba said, “our focus should not only be on the response to Cyclone Idai but also to the drought affected population.”

The revised Humanitarian Flash Appeal aims to respond to the rising humanitarian needs of people in Zimbabwe due to a dry spell, challenging economic situation and compounded by the recent Cyclone Idai disaster in the eastern highlands part of the country.

According to the UN Financial Tracking System (FTS) the funding for the drought response stands at USD 25.5 million representing 11% of the total requirement. For Cyclone Idai the total funding received so far amounts to USD 5.4 million. Several additional pledges have been made by humanitarian partners and the FTS will update the response level going forward.

The three main objectives of the Humanitarian Flash Appeal remain as follows:

• To save lives and livelihoods by providing integrated humanitarian assistance and protection to people impacted by the economic crisis and severe food insecurity,
•To provide life-saving humanitarian health assistance by responding to outbreaks and procuring essential medicines,
• To build resilience of the most vulnerable communities to mitigate against the impact of the deteriorating economic situation.

Noting that the revised appeal complements the Government’s ongoing interventions and emphasising on the need to consistently adhere to humanitarian principles of impartiality, neutrality, independence and humanity in relief distribution in which those in need of assistance receive, Mr. Parajuli, said, “The Flash Appeal will continue to target the Cyclone Idai victims, hardest-hit districts, which were prioritised based on information and data available while a humanitarian cluster needs assessment is underway.”

Commending the strong partnership in response to Cyclone Idai, Permanent Secretary Chigwamba reiterated that a comprehensive needs assessment to ascertain the immediate needs of the population and the post recovery needs, particularly infrastructure reconstruction and rehabilitation.

The Humanitarian Flash appeal contributes to the 2030 Agenda for Sustainable Development and it 17 goals, by advancing the overarching principle of “leave no one behind” and adopting humanitarian-development and peace building nexus in support of Zimbabwe’s commitments to furthering its human rights and humanitarian obligations.

The United Nations System, through 2016-2020 Zimbabwe United Nations Development Assistance Framework, works with various partners to advance democratic, social and economic governance for quality service delivery in the areas of food and nutrition, gender equality, HIV and AIDS, poverty reduction, social services and protection and governance and human rights. To date, the UN in Zimbabwe has delivered over USD 1.2 billion in various development projects under the 2016-2020 ZUNDAF as it works towards inclusive growth and sustainable development in the country.