People mill around in the unkempt Square

Africa Unity Square, for long one of Harare’s beautiful green lungs, has been run down, leaving it a pale shadow of its former self.

For instance, the once famous water fountain, the source of many photographs taken with people pausing in front of it, has become a ghostly shell and some people now even use it as a bin. A lot of litter is thrown there.

A vagrant seems to have found a home in the fountain and has stashed his belongings there.

Only Jacaranda trees that naturally and voluntarily give their purple plumage every September and the national flag, still give a glimmer of hope to the Square, first built in September 1890.

Harare City Council has failed to maintain the lawns and the lush greenery is gone, mounds of uncollected garbage and litter abound.

Flowers that gave the Square its ambience are drying owing to lack of maintenance.

Bins that used to be placed along each marked footpath are no longer there, leaving the Square’s grounds littered. 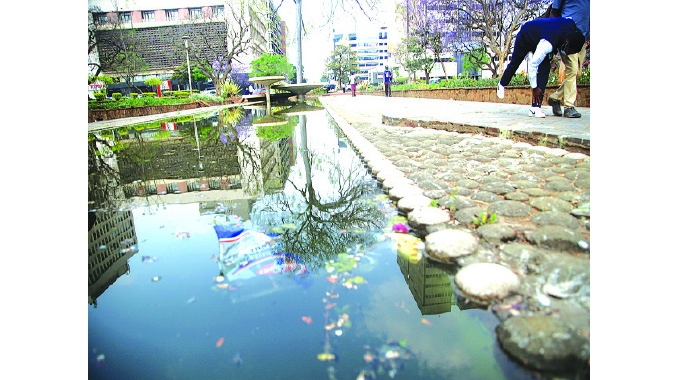 Even the huge skip bin placed near the flower vendors is always spilling after months of non-collection.

The problem has been worsened by scores of people who loiter and gather in the park. The defined and marked footpaths are carelessly ignored and have given birth to new footpaths that spread all over the lawns like the arms of an octopus.

“City of Harare is responsible. The biggest challenge we are having is thefts and vandalism of infrastructure. Just last night, a bench that was recently donated was stolen. We however, continue with our efforts to make the park an ideal destination.

“Rubbish will continue being cleared off the park, but we implore our patrons to be responsible and use the bins,’’ he said.

Day-in, day-out, the African Unity Square has become hot to people who do nothing but loiter, Covid-19 restrictions or no restrictions.

In an interview, Mrs Alice Mutemererwa, yesterday said she was whiling up time, waiting for a driver bringing her parcel from Mutoko.

“This is a central place between Simon Muzenda bus terminus and Market Square, so whichever place the driver finally parks, it is easy to get there from here.

Jimmy, a street photographer for 25 years in the square, says council has let them down.

“Obviously I don’t want my full names and pictures in the paper because council will hound me out of this place. To be honest, things are very bad here. The fountain used to be the main attraction for our pictures and now how do you convince a person to have a picture taken with an empty fountain?

“How do you expect a person to have nice pictures when the green is gone, the flowers are gone and only the Jacarandas that come once a year into bloom remain. We can go for weeks on end without litter being collected. That is not good for pictures,’’ he said.