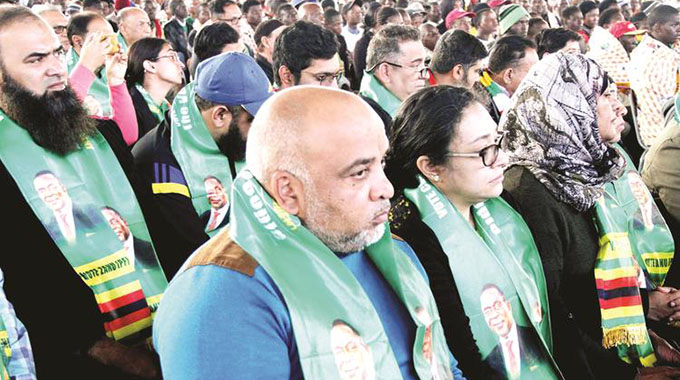 Members of the Asian community follow proceedings during a meeting with Vice President Constantino Chiwenga in Belvedere, Harare, yesterday. — Picture by Memory Mangombe

Tendai Mugabe Senior Reporter
Vice President Constantino has added his voice to the growing condemnation of the terrorist attack targeted on President Mnangagwa and the top zanu-pf leadership at White City Stadium in Bulawayo two weeks ago.

He said the perpetrators of that cowardly act would be brought to book and security arms were investigating the matter.

“You all saw what happened at the White City Stadium in Bulawayo,” he said.

“That is not what we expect in Zimbabwe. It is something that we condemn in strongest terms. These terrorists will be apprehended. The police and other security arms are investigating the matter to its logical conclusion.

“Eventually they will be arrested because they have nowhere to hide. They injured innocent people, 49 of them and have two passed away. Some are still in hospital including our Vice President (Cde Kembo Mohadi) and our national chairperson (Cde Oppah Muchinguri-Kashiri). Why do you do such heinous things? To benefit what? We want peace and unity in our country.”

He said President Mnangagwa’s administration was prioritising development ahead of politics and sloganeering.

He said soon the President would also commission the US$4,2 billion Karo Resources platinum project in Chegutu.

“We are coming to you with our Manifesto which is straightforward. It outlines what President Mnangagwa plans to do after the July 30 elections. After the elections will start to implement all the things we promised that we are opening Zimbabwe for business.

“I urge you to vote wisely in the coming elections to ensure development of our country.

“Eighteen years of isolation had stagnated development. In just six months, President Mnangagwa and his administration has secured US$20 billion investment commitments. Only last week the President was commissioning Hwange Thermal Unit 7 and 8 that is going to employ more than 3 000 people. Every week we continue to open industries and retooling them. That is what we want to develop our country,” said VP Chiwenga.

VP Chiwenga urged people to vote for President Mnangagwa and all zanu-pf candidates.

He said those moving around urging people to vote for the President alone were enemies of the revolutionary party.