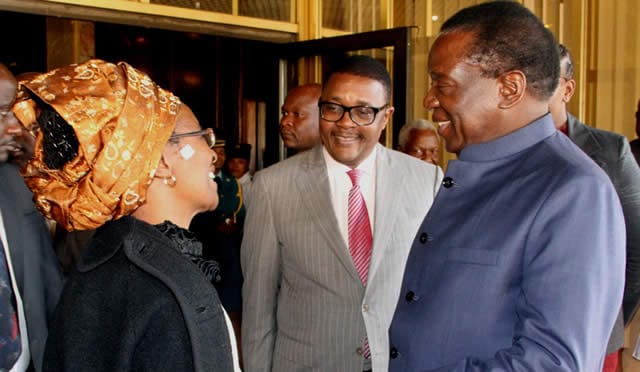 A long-standing tiff between President Emmerson Mnangagwa and former Tourism and Hospitality Industry minister Walter Mzembi has resulted in the fugitive ex-Zanu PF stalwart pleading with South Africa not to extradite him to Zimbabwe where he is wanted by the police in connection with charges of criminal abuse of office and theft of trust funds totalling to US$847 000.

Mzembi, in turn, denies the charges being levelled against him and emotionally narrated how dethroned late president Robert Mugabe and incumbent Vice President Constantino Chiwenga saved him from assailants sent by the Zimbabwe septuagenarian.Emmerson Mnangagwa

He further claims that the requested extradition is a filthy scheme by Mnangagwa to have him back home and kill him.

The former cabinet minister told one online publication in a wide-ranging interview in downtown Johannesburg that he survived three assassination attempts at the hands of assailants hired by Mnangagwa to kill him.

Mzembi, who skipped the country two years ago while on bail, said he would be slaughtered like a sheep should President Cyril Ramaphosa’s South African government extradite him.

This comes at a time when the National Prosecuting Authority (NPA) has requested the South African Government to extradite Mzembi so that he stands trial to the criminal abuse of office and theft charges he is facing, back home.

According to Mzembi, his hostile relations with Mnangagwa were birthed during the 2005 Tsholotsho Declaration- an intraparty scheme of factionalists who wanted the current Zimbabwe leader to be appointed deputy president ahead of Joice Mujuru in former president Mugabe’s government.

The VP post had, then, been left vacant following the demise of Simon Muzenda, a long-serving understudy of the late Mugabe.

Mzembi had allegedly thwarted efforts by an establishment loyal to Mnangagwa angling for the later’s appointment.

“Remember Zanu PF operates along tribal lines. So my fellow Karangas who included Mudenge and Josaya Hungwe tried to rope me into the team that was lobbying for Mnangagwa. So, when I refused, all hell broke loose,” the former minister told the online Zimbabwe Observer.

Mzembi also narrated how former education minister Stan Mudenge summoned him to his parliamentary office, on the eve of the infamous Tsholotsho Declaration, and openly warned that he would die in the event that he continued to thwart Masvingo region’s quest to wrestle power from the Zezurus.

The fugitive former minister also recalled that, a few minutes after walking into parliament, Mnangagwa, who was then Speaker, beckoned him to his high chair and told him not to worry about what Mudenge had told him as he would protect him.

“I wondered how Mnangagwa had, in such a short space of time, come to know about Mudenge’s threats,” said Mzembi.

“This is not fiction. Lucky Hakata, a freelance photographer, I had hired to take pictures of my projects in my constituency, was shot dead, execution-style in my brand new Pajero by assassins who mistook him for me. I was supposed to have gone with him but remained in Harare, owing to other commitments. About 45 minutes later, I received a call from Featherstone Police telling me my car had been involved in an accident and Hakata was dead.”

When he arrived at the scene of the accident, Mzembi said, the wreckage had already been taken away.

Dethroned late dictator Mugabe is also alleged to have told Mzembi that he should be wary of Mnangagwa whose ‘cruelty knows no bounds and will avenge even at the slightest of provocations’.

On how (Rtd) General Chiwenga assisted him to foil another attempt on his life, the former Zanu PF minister said:

“Chiwenga called me to find out where I was and when I told him I was driving back to Harare, he told me to make a U-turn or catch a bus as there were assassins waiting for me on the Masvingo-Harare Road”.

He also claimed that a self-confessed assassin, Munyaradzi Mupazviripo, was allegedly promised US$50 000 if he executed him. Mzembi subsequently filed a report at Borrowdale Police Station on January 24, 2015, exposing the plot.

“I have been in the system and I know how these guys operate. I never had this problem of colon cancer before my arrest. I walked out of custody only to be diagnosed with a rare condition which doctors could not explain. My affected colon was cut away, but doctors couldn’t detect how that portion got cancer as there was no tracing whatsoever,” Mzembi said.

During the time of publishing, Harare was yet to respond to Mzembi’s allegations.