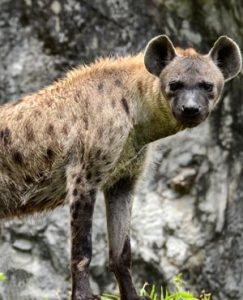 Dramatic video footage and photos emerged on Thursday of the bloody remains of a hyena kill – right in the foyer of a luxury Zimbabwe safari camp.

“In the early hours of the morning, we were woken up to find that 14 hyenas had pulled down an adult Kudu Bull… in our main (reception) area!” Kavinga Safari Camp said on its Facebook page.

“It’s going to take quite a few buckets and mops to clean up this mess!”

Photos posted by the camp show the kudu bull, his majestic spiralling horns still intact, lying dead in a large pool of blood in the middle of what was an immaculately polished floor now covered with the bloody paw prints of the kudu’s killers.

The camp owners are calling it their “CSI moment” after the popular US TV crime series.

Video footage shows the moment staff members at Kavinga, armed with rifles and carrying flashlights, first approach the darkened reception area early on Thursday morning to investigate and express amazement at what they find.

“The guests don’t have to walk far for a wildlife experience today!” the camp quipped on Facebook.

‘Talk about a mess’

Readers posted their comments under the photos.

“Oh my goodness!! Talk about a mess – that must have been one hell of a commotion,” wrote Lynne Steyn Wilde.

Wrote Debbie Dave Prioleau: “That truly is something! Good luck with the mopping up process.”

Kavinga Safari Camp is located in Mana Pools, one of Zimbabwe’s most popular national parks along the Zambezi River. The area is rich in big game, including buffaloes, lions and elephants.