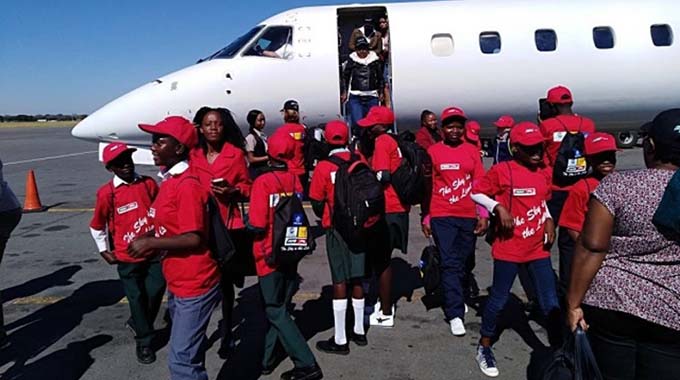 Leonard Ncube and Nyemudzai Kakore
At  least 18 disadvantaged children randomly selected from four schools were recently treated to a rare life experience when some companies organised a trip for them from Harare to Victoria Falls.

The children, aged between 11 and 18, were selected from Grades Six and Seven classes at Capota School for the Blind in Masvingo, Hilbre Primary in Darwendale, Mandalay Primary under Goromonzi District and St Marceline Primary in Hatfield.

They included one girl with albinism, some who are partially blind and an 18-year-old Onai Mupedzanhuna, a deaf-blind pupil at Capota, who enjoyed the tour with the aid of her teacher, Mrs Sitembile Marare, who was updating her using tactile/touch sign language.

The initiative was a partnership between Puma Energy, Redan, Civil Aviation Authority of Zimbabwe and Love for Africa as part of their corporate social responsibility.

The initiative was aimed at affording disadvantaged children an opportunity to interact with various careers in the aviation sector to give them options in their career paths.

After landing at the Victoria Falls International Airport around 1100 hours the 11 girls and seven boys were taken on a tour of the giant facility.

They could not hide their joy as they smiled all the way while posing for pictures around the airport before they proceeded to view the falls and rainforest, after a lunch at a fast food outlet in the town.

Mirriam Phiri, who has albinism and is in Grade 7 at Kapota, said after the experience she had committed herself to be a pilot.

Chipo Musanhi from St Marceline Catholic institution said she initially wanted to be an engineer, but after the experience she would want to become an air hostess.

“We have been taught on how to become pilots or air hostess and this is what I want to do,” she said.

Talknice Siyachungwe from Hilbre said: “This is my first time to board an aeroplane as well as visit the Victoria Falls. I used to see aeroplanes when they passed by our village and the Victoria Falls on television, but today I experienced both.

“l am going to write a composition on my experience.”

They were chosen for the adventure after writing an essay titled “Why I want to fly.”

“This is a programme where we have, jointly with Puma, Redan, Fastjet and Love for Africa, taken underprivileged children from some disadvantaged schools as part of our corporate social responsibility.

“We took a cue from the First Lady who is working with the underprivileged countrywide and headmasters chose them after writing some essays,” she said. “We believe this will open them up in terms of the professions they want to do.

“These children really don’t know much, hence we wanted to show them that there are many professions that they can be exposed to as they experienced what it takes to fly an aircraft.”

“This came as an idea to select schools that fall under the approach route to Robert Gabriel Mugabe International Airport,” she said. “What is magnificent about it is that these children had never had the opportunity to go to an airport closer to an aeroplane and here are corporate companies being involved in exposing them.

“We intend to do this as an annual event with children who may never have the opportunity to be exposed to multiple jobs in aviation and maybe in 10 years’ time we would have one of them taking up a job in aviation.”